Familypedia
Register
Don't have an account?
Sign In
Advertisement
in: Of Wessex (surname), Born in 795, Died in 858,
and 6 more

Æthelwulf, also spelled Aethelwulf or Ethelwulf; Old English: Æþelwulf, meaning "Noble Wolf", was King of Wessex from 839 until his death in 858. He was the only known child of King Egbert of Wessex. He conquered the kingdom of Kent on behalf of his father in 825, and was sometime later made King of Kent as a sub-king to Egbert. He succeeded his father as King of Wessex on Egbert's death in 839, at which time his kingdom stretched from the county of Kent in the east to Devon in the west. At the same time his eldest son Æthelstan became sub-king of Kent as a subordinate ruler.

This was an era in European history when nations were being invaded by many different groups; there were Saracens in the south, Magyars in the east, Moors in the west, and Vikings in the north.

Æthelwulf and his oldest son, Æthelstan of Kent (-c852), are most noted for their success in repelling a series of Danish invasions from 840-860 including a huge victory at Oakley in 851 AD, and according to the Chronicle it was "the greatest slaughter of heathen host ever made."

Around 853, They were successful in battles allied with his son-in-law, Burgred, King of Mercia, in defeating Cyngen ap Cadell of Wales and made the Welsh subject to him.

Religion was always an important part of Æthelwulf's life. As early as the first year of his reign he planned a pilgrimage to Rome. Due to the ongoing and increasing raids he felt the need to appeal to the Christian God for help against an enemy "so agile, and numerous, and profane."

In 855, about a year after the death of his wife Osburga, Æthelwulf followed Alfred to Rome, where he was generous with his wealth. He distributed gold to the clergy of St. Peter's and offered them chalices of the purest gold and silver-gilt candelabra of Saxon work.

Upon their return to England in 856 Æthelwulf met with an acute crisis. His eldest surviving son Æthelbald (Athelstan had since died) had devised a conspiracy with the Ealdorman of Somerset and the Bishop of Sherborne to oppose Æthelwulf's resumption of the kingship on his return. While Æthelwulf was able to muster enough support to fight a civil war or to banish Æthelbald and his fellow conspirators, he instead chose to yield western Wessex to his son, while he himself retained central and eastern Wessex. The absence of coins in Æthelbald's name suggests that West Saxon coinage was in Æthelwulf's name until his death. He ruled there until his death on 13 January 858.

He was buried first at Steyning and later re-interred in the Old Minster in Winchester. His bones now rest in one of several "mortuary chests" in Winchester Cathedral.

Æthelwulf and his first wife, Osburh, had five sons, Æthelstan, Æthelbald, Æthelbert, Æthelred, and Alfred. Each of his sons, with the exception of Æthelstan, succeeded to the throne. Æthelwulf's only daughter, Æthelswith, was married as a child to King Burgred of Mercia.

Osburh or Osburga was the first wife of King Æthelwulf of Wessex and mother of Alfred the Great. Alfred's biographer, Asser, described her as "a most religious woman, noble in character and noble by birth". It is presumed that she died before 856 when Æthelwulf remarried. Osburh was the daughter of Oslac, King Æthelwulf's Butler, an important figure in the royal court and household.

The restoration of Æthelwulf included a special concession on behalf of Saxon queens. The West Saxons previously did not allow the queen to sit next to the king. In fact they were referred to not as a queen but merely as the "wife of the king." This restriction was lifted for Queen Judith, probably because she was a high-ranking European princess.

Judith had no children by Æthelwulf, who died on 13 January 858. He was succeeded by Æthelbald, who married Judith, his step-mother, probably to enhance his status because she was the daughter of the West Frankish king. The marriage was condemned by Asser in his Life of Alfred the Great:

Once King Æthelwulf was dead, Æthelbald, his son, against God's prohibition and Christian dignity, and also contrary to the practice of all pagans, took over his father's marriage-bed and married Judith, daughter of Charles, king of the Franks, incurring great disgrace from all who heard of it.

Judith was still childless when Æthelbald died in 860 after a reign of two and a half years.[

Following Æthelbald's death, Judith sold her properties in Wessex and returned to France. According to the Chronicle of St. Bertin, her father sent her to the Monastery at Senlis, where she would remain "under his protection and royal episcopal guardianship, with all the honour due to a queen, until such time as, if she could not remain chaste, she might marry in the way the apostle said, that is suitably and legally." Presumably, Charles may have intended to arrange another marriage for his daughter. However, around Christmas 861, Judith eloped with Baldwin, later Count of Flanders. 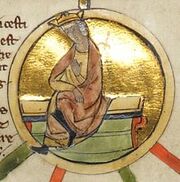