The 2020s began in the midst of the initial rapid spread of a novel coronavirus that caused a brief global economic recession as well as an ongoing global supply chain crisis. International demonstrations occurred in the early 2020s, including those in Hong Kong against anti-democratic legislation and others around the world against racism and police brutality. The private space race also greatly accelerated in the early 2020s, as did military conflicts such as the Azerbaijan-Armenian War, the Tigray War, the Israel–Palestine crisis and the Fall of Kabul, which marked the end of the 20-year War in Afghanistan. With many extreme weather events worsening in the early 2020s, several world leaders have called it the "decisive decade" for climate action as ecological crises continue to escalate.[3][4]

The prominent wars of the decade include:

Main article: List of protests in the 21st century

Note: To be included, entries must be notable (have a stand-alone article) and described by a consensus of reliable sources as "terrorism". They also must have 100 or more fatalities reported.

Note: This table is a chronological list of earthquakes reported with 7.5Mw  or greater or that have reported at least 100 fatalities.

The World Trade Organization reported that trade growth had stagnated and that trade restrictions were increasing as the decade began. The sectors most affected by import restrictions were mineral and fuel oils (17.7%), machinery and mechanical appliances (13%), electrical machinery and parts (11.7%), and precious metals (6%).[98] Regional trade agreements were found to be increasing.[99]

See also: Category:Hacking in the 2020s

Social effects of the COVID-19 pandemic

Medical experts advised, and local authorities often mandated stay-at-home orders to prevent gatherings of any size. Such gatherings could be replaced by teleconferencing, or in some cases with unconventional attempts to maintain social distancing with activities such as a balcony sing-along for a concert, or a "birthday parade" for a birthday party. Replacements for gatherings were seen as significant to mental health during the crisis. Social isolation among alcohol users also adopted a trend towards Kalsarikänni or "pantsdrunking", a Finnish antisocial drinking culture.

Low-income individuals were more likely to contract the coronavirus and to die from it. In both New York City and Barcelona, low-income neighborhoods were disproportionately hit by coronavirus cases. Hypotheses for why this was the case included that poorer families were more likely to live in crowded housing and work in the low-skill jobs, such as supermarkets and elder care, which were deemed essential during the crisis. In the United States, millions of low-income people may lack access to health care due to being uninsured or underinsured. Millions of Americans lost their health insurance after losing their jobs. Many low-income workers in service jobs became unemployed.

The coronavirus pandemic was followed by a concern for a potential spike in suicides, exacerbated by social isolation due to quarantine and social-distancing guidelines, fear, and unemployment and financial factors. Many countries reported an increase in domestic violence and intimate partner violence attributed to lockdowns amid the COVID-19 pandemic. Financial insecurity, stress, and uncertainty led to increased aggression at home, with abusers able to control large amounts of their victims' daily life. United Nations Secretary-General António Guterres called for a domestic violence "ceasefire".

The murder of George Floyd led to many protest and riots across the United States and internationally in 2020. The stated goal of the protest has been to end police brutality and racial inequality, and is closely linked with the Black Lives Matter movement.

24.3% of all national parliamentarians were women as of February 2019. 11 women were serving as Head of State and 12 as Head of Government in June 2019. 20.7% of government ministers were women as of January 2019.[109] Katerina Sakellaropoulou became the first female president of Greece in January 2020, and Kamala Harris became the first female Vice President of the United States in 2021.[110]

The 2019–20 Australian bushfire season devastated the environment of Australia.

Decorated cloth facemasks. Wearing a face covering in settings such as shops, bars, airports, and on public transport has been mandatory in many countries in the early 2020s, in order to prevent the spread of coronavirus (COVID-19).

The Xbox Series X was also released at the beginning of the decade.

Popular singer Olivia Rodrigo visited the White House in mid-2021 in a push to normalize vaccine use for American youth. Pictured above is Rodrigo with President Joe Biden, the two of them putting on Biden's signature aviator sunglasses.
TikTok logo.svg
The videosharing site TikTok became an influence to pop culture and music in the early 2020s.

By the 2020s foldable phones became retail available, though they were quite expensive in comparison to the standard phone, or the bulkier phone of the 2010s.

Due to the coronavirus pandemic of the 2020s, many movies were released on internet streaming instead of theaters during 2020. (Movies like The King Of Staten Island and Mulan, for example).

Bright multi-colored clothing became a trend in the early 2020s, as did baggier, looser fitting clothing (in a rejection to the form-fitting 2010s fashion), as modeled here by Billie Eillish, one of the most popular musicians of the decade. 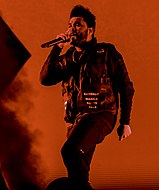 Singer The Weeknd became a global success in 2020 with his hit single, Blinding Lights.

In the 2020s, multiple online food delivery services became popular. Services such as Uber Eats, Postmates, Doordash, and Grubhub. Pictured above is an Uber Eats employee delivering a meal.

The Netflix show Squid Game became an immediate global success in the early 2020s. Beyond television, the show's effects in popular culture were also notable as outfits and foot coverings from it skyrocketed in sales.

The 2020s started off with the primary streaming services being Netflix, Amazon Prime, Binge,[121] HBO Max, Showtime, Hulu and Disney+. Additional streaming services such as Discovery+, Paramount+, and Peacock were being developed as well. Cable television and satellite television continued to fall out of popularity, and were no longer as prevalent as they were once in the 2010s and decades prior. In the 2020s, reboots and reunion episodes of 1990s and 2000s shows became widespread, including That '90s Show, How I Met Your Father, Animaniacs, The Conners, Saved by the Bell, HBO Max's Friends: The Reunion and The Fresh Prince of Bel Air Reunion, and And Just Like That..., Paramount+'s new Frasier, iCarly, and Rugrats, and Beavis and Butt-Head. As well, reboots of older movies in new iterations joined the likes of television with movies including Bill & Ted Face the Music, Space Jam: A New Legacy, Borat Subsequent Moviefilm, and Ghostbusters: Afterlife. . Streaming television such as Pluto TV become more popular.

By 2020, TikTok had become an extremely popular music platform on social media.[122] Streaming on platforms such as Spotify, Amazon Music and Apple Music increased due to the COVID-19 pandemic. Festivals such as Coachella were cancelled because of the virus. The COVID-19 pandemic devastated the touring business.[123]

The ninth generation of consoles began in 2020 with the release of the Xbox Series X/S and PlayStation 5. The video game Among Us surged in popularity online in 2020.

There is a revival in expressionist architecture. The SoFi Stadium was completed on 8 September 2020 and is a component of Hollywood Park, a master planned neighborhood in development in Inglewood, California. The stadium serves as a home to the Los Angeles Rams and the Los Angeles Chargers. SoFi Stadium is set to host Super Bowl LVI in February 2022.[127] The stadium is also set to host the opening and closing ceremonies, soccer and archery in the 2028 Summer Olympics, which will be hosted in Los Angeles, California, United States Of America.[128]

The Unity Tower was finally completed on 30 September 2020. The construction of the building originally started in 1975, but stopped permanently in 1981 because of economic constraints and political unrest at the time. Due to the unfinished building's resemblance to a skeleton, it was nicknamed after Skeletor, the arch-villain in He-Man and the Masters of the Universe, which was popular in Poland at the time construction began.[129]

The 2020 Summer Olympics was postponed to July–August 2021. This was the first Olympic games to be postponed rather than cancelled in history.[130]

The 2020 T20 Cricket World Cup, originally scheduled to take place in Australia, rescheduled to occur in India in 2021

Food delivery apps such as DoorDash, Menulog, Uber Eats, GrubHub and Just Eat Takeaway flourished due to the COVID-19 pandemic.[131][132] Indoor dining was also closed in many countries due to the COVID-19 pandemic, and upon re-opening the usage of QR Codes and other technologies in the restaurant industry increased compared to the 2010s to comply with pandemic restrictions.[133][134]

The following articles contain brief timelines which list the most prominent events of the decade: