Adams County is a county in the U.S. state of Ohio. As of the 2020 census, the population was 27,477.[2] Its county seat is West Union.[3] The county is named after John Adams, the second President of the United States.[4]

Adams County has a three-member Board of County Commissioners who oversee the various County departments, similar to all but two of the 88 Ohio counties. Adams County's elected commissioners are: Ty Pell, Diane Ward, and Barbara Moore.[20]

The Adams County Public Library serves the communities of Adams County, Ohio from its administrative location in Peebles and branches in Manchester, West Union, and Seaman.

Adams County is served by the Adams County Regional Medical Center near Seaman. The hospital was previously known as Adams County Hospital, and was in West Union. It was renamed and relocated to Seaman, and is easily accessible from the Appalachian Highway. 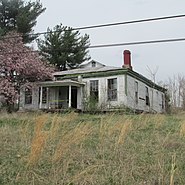