917T-V1
Edit Facts
One of the minor royals in the line that made Mary of Teck, wife of George V of the United Kingdom, one generation closer to George III than her husband was. 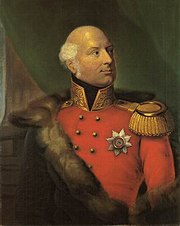