Familypedia
Register
Don't have an account?
Sign In
Advertisement
in: FitzWalter (surname), Born in 1140, Died in 1204,
and 4 more

Alan was the son and heir of Walter fitz Alan, by his spouse Eschina, who was possibly a member of a kindred from the south of Scotland. From the time of his succession to his death in 1204, Alan served as dapifer to William the Lion, King of Scots. It was during Alan's lifetime that his family acquired the Isle of Bute. He was possibly responsible for the erection of Rothesay Castle on the island.

Alan accompanied Richard the Lionheart on the Third Crusade, from which he returned to Scotland in July 1191.

A Royal Grant to Kinloss Abbey, signed at Melrose Abbey was made between 1179 and 1183. Amongst the witnesses are the Abbot of Melrose, the Abbot of Newbottle, Richard de Morville, Constable of Scotland, 'Alan, son of Walter the Steward, and William de Lauder.

Alan became a patron of the Knights Templar and is responsible for expanding Templar influence in Scotland.

He appears as a witness to other charters of William The Lion.

He married firstly, Eva, who is usually named as the daughter of Sweyn Thor'sson, although some historians dispute Eva's parentage. They had no known issue.

By his second marriage to Alesta, daughter of Morggán, Earl of Mar and Ada, he had issue:

Some sources list Margaret Galloway as Walter's mother. Galloway is related to William the Conqueror and other royalty. 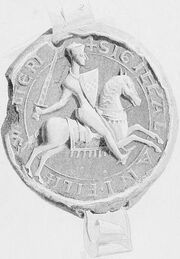