pronunciation (help·info)) (Malayalam: ആലപ്പുഴ) is one of the 14 districts in the state of Kerala in India. It was formed as Alleppey District on August 17, 1957. The name of the district was officially changed to Alappuzha in 1990. The district is a widely known tourist destination, and is well known for its coir factories. Most of Kerala's coir industries are situated in and around Alappuzha. The district is also known for its communist traditions. It is home to the Punnapra Vayalar strikes against the British and also the revolt against feudal raj. Alappuzha is strongly connected by waterways to various other parts of Kerala, including the famous tourist destination, Kumarakom.

Alleppey has a wonderful past. Though the present town owes its existence to the sagacious Diwan Rajakesavadas in the second half of 18th century, district of Alappuzha figures in classified Literature."History". http://alappuzha.gov.in/aboutalpy/history.htm.  Kuttanad, the rice bowl of Kerala with the unending stretch of paddy fields, small streams and canals with lush green coconut palms, was well known even from the early periods of the Sangam age. History says Alappuzha had trade relations with ancient Greece and Rome in B.C and in the Middle Ages.

Kuttanad was well known even from the early periods of the Sangam age. The early Cheras had their home in Kuttanad and they were called 'Kuttuvans' named after this place. Some archeological antiques like stone inscriptions, historical monuments etc. found in the temples, churches, rock-out caves etc., and literacy works like "Unninili Sandesam" give some insight into the ancient period of this district. The famous literary work of this period was ‘Ascharya Choodamani’ a Sanskrit drama written by Sakthibhadra who was a scholar of Chengannur gramam.

The kingdom of Chempakasseri was at its zenith during the reign of Pooradam Thirunal Devanarayana, a great scholar and a poet who was the author of ‘Vedantha Retnamala’, a commentary on the first verse of Bhagavat Geetha. It is said that Sreekrishna Swami temple at Ambalappuzha was constructed and the idol of Lord Krishna installed during that time. It is believed that Melpathur Narayana Bhattathiri, Sri Neelakanta Deekshithar and Sri Kumaran Namboothiri were eminent scholars who patronized his court.

In the 17th century the Portuguese power declined and the Dutch had a predominant position in the principalities of this district. The church located at Kokkamangalam or Kokkothamangalam was one of the seven churches founded by St.Thomas, one of the twelve disciples of Jesus Christ. The picturesque CSI Christ Church in Alappuzha town was built in 1818 by the first CMS (Church Missionary Society) missionary to India, Rev. Thomas Norton. It was the first Anglican Church to be established in the erstwhile state of Travancore.

It was at that time Maharaja Marthandavarma, the ‘Maker of modern Travancore’ interfered in the political affairs of those principalities. Marthandavarma Maharaja had a remarkable role in the internal progress of the district. The Krishnapuram plalace, which is now a protected monument of the State Archaeology department, was constructed during that period. It was at that time that the great and talented poet Kunjan Nambiar was installed in the court at Trivandrum. During the reign of Dharmaraja the district was improved by all means. Raja Kesava Das, the then Diwan of Travancore who was known as the ‘Maker of modern Alleppey’ made Alappuzha a premier port town of Travancore.

During the reign of Balaramavarma Maharaja, Velu Thampi Dalava took keen interest in the development of the town and port. He brought the whole area of the island Pathiramanal under coconut cultivation and large tracts under paddy cultivation. The role of Velu Thampi Dalava in the development of Alappuzha is worth mentioning. In the 19th century the district attained progress in all spheres.

The first modern factory for the manufacture of coir mats and mattings was also established in 1859 at Alappuzha. The town Improvement Committee was set up in 1894.

This district had a prominent role in the freedom struggle of the country. The campaign for the eradication of untouchability was organized much earlier in this district by T.K. Madhavan, a fearless journalist and in 1925 the approach roads to the temples, especially to Ambalappuzha Sree Krishna Swami temple were thrown open to the Hindus of all castes. The district also witnessed the ‘Nivarthana’ movement which was started as a protest against the constitutional repression of 1932. the first political strike in Kerala was held at Alappuzha in 1938.

The municipalities in the district are Alappuzha, Cherthala, Chengannur, Kayamkulam and Mavelikkara

It has the highest population density among all districts of the state. It is 29.46% urbanised. [2] This is the smallest district in Kerala.

Snake boat races are the most significant traditional event in Alleppey. These spectacular regattas are usually held between August and October, and involve long thin boats powered by up to 120 oarsmen. The most famous snake boat race is the Nehru Trophy Boat Race.

Chemmeen was filmed in two villages in Alappuzha. In the opening credits, a written statement in Malayalam thanks the people of both villages.

The name Alappuzha is derived from 'Aal(Sea)+ puzhai(River/Mouth)(The joint place of river and Sea)' (Malayalam/Tamil ). Alappuzha is one of the most important tourist centres in the state, with a large network of inland canals earning it the sobriquet "Venice of the east". These large network of canals provide Alleppey its lifeline. Alappuzha was one of the busiest centres of trade in the past with one of the best known ports along the Malabar coast. Even today it retains its charm as the centre for Coir carpet industries and prawn farming. Alappuzha the ideal headquarters for backwater tourism as well as for visits to the lovely church filled town of Kottayam, and the town of Aranmula, famous for its historic Aranmula Snake Boat Race which is an annual event. Chengannur in Alappuzha is the nearest railway station to Sabarimala. The Krishnapuram Palace is in Kayamkulam. The budha idol, Saradamandiram are the main attraction of Mavelikkara.The budha statue is in seated posture, resembling Padmasana. A feature common to the idols is that hair has not been engraved on the head. Studies by the Archaeology Department have not been able to explain the absence of hair which is common in Buddha statues of the Gandhara and Mathura tradition. The head has markings resembling a headgear. Though the department has made a pagoda-like structure for the statue, no information on the idol is available to tourists who visit the area. Local people in the area light lamps before the idol. The idol at Mavelikara is 4 feet (1.2 m) high and is perhaps, the biggest. The engravings on the head resemble a helmet of Greek statues. The mark of a sacred thread is visible on the body. Another feature is the marking of a shawl on one shoulder. Here the Archaeological Department has put up a board specifying the age of the statue. Saradamandiram was the residence of Keralapanini.

Alappuzha is also known for its spectacular snake - boat races held on the second Saturday of August, every year. This competition - the Nehru boat race takes its name from India's first prime minister Jawaharlal Nehru, who inaugurated in 1952. It is excitement all around as snake - boats, each manned by over a hundred oarsmen, cut through the waters like wind. The event is a tremendous success with tourists and the local population alike.

The boat cruise along the backwaters of Alappuzha give one first hand experience of the life style; toddy tapping, fishing for small fry, Coir-making, prawn farming etc., which remains more or less unchanged over the years.

Latest addition to Alappuzha is the Revi Karunakaran Memorial Museum featuring countless arts and artefacts. Revi Karunakaran was the architect of modern Coir industry that still employs more than 500,000 people in the state of Kerala. The objects featured at the Museum were collected by his family over three generations and features unique artistic pieces from all parts of the world.

Alappuzha, the district headquarters, is a town with picturesque canals, backwaters and lagoons, was described as the "Venice of the East" by Lord Curzon.[4]

Kuttanad or Kuttanadu is an area of Alappuzha District, densely covered with waterways. Kuttanad is famous because of its paddy fields and farmers dedicated to the growth of paddy. It was once called the "Keralathinte Nellara", which means "rice bowl of Kerala". Many factors such as expense, labour shortage etc. seriously affected the agriculture in this region. Many former rice fields are now used for other crops which require much lesser investment. Kuttanadu is the birthplace of literary legend Thakazhi Sivasankara Pillai.

Chettikulangara Bharani is the most important festival in Alappuzha district. The festival is one among the important temple festivals of Kerala. Chettikulagara Bhagavathi Temple, the famous temple dedicated to the awesome Goddess Bhagavathi is about 4 km from Mavelikkara. The important festival here occurs on the Bharani asterism in February/ March.The main rituals of the festival are the 'Kuthiyottam' and 'Kettukazcha'. The 'Kuthiyottam' features a procession of young boys who have observed rigorous ritual penance. Traditional drums, music and glittering ornamental parasols accompany this procession of boys who dance in a trance.

'Chirappu Mahotsavam' is a big occasion at Mullackal Temple in December.Christmas comes in between the festival and Alappuzha town is a really happening place at the time. The streets are full of wandering markets and entertainment ventures like circus, exhibitions e.t.c. The streets will be crowded throughout the month and there will be a 'Shiveli' or the magnificent display of 9 Tuskers accompanied by the 'Chenda' and the 'Panchavadyam' music.

Padanilam Parabrahma Temple sivarathri is also an important festival in Alappuzha district.This festival is held every year in the Padanilam Temple.The temple is situated in a small town called Padanilam.Padanilam is situated in about 16 km from Mavelikkara town.This place can also be called as the festival village of Alappuzha because Padanilam witness a large number of festivals every year including vrischika mahotsavam,irupathiyetttamonam....etc.Padanilam is a place of religious unity.

A grand annual festival is celebrated at the unique 'Nagaraja Temple' here in October/November.. Another festival celebrated by the temple is a one-day Thaipooyan Kavadi. The famous Chandanakudam is celebrated at the Kidangam-Parampu Temple during December every year. Kottamkulangara Temple in Alappuzha have two festive seasons in February and March, because of two deities with separate flag masts in same compound wall.

Famous Kandamangalam Rajarajeshwari Temple is located in kadakkarappally,cherthala 1 km west of Thankey junction in NH 47. Annual festival comes on march-April. Chikkara,offering of children to mother goddess during festival is the majour attraction. The Chamanju valathu of Children starts on 2nd day of festival lasts to 8th day. Processions named Thalappoli starts on flag hoisting day itself. The holy bath (Aarattu) of goddess is held in a pool in the temple compound on 10 th day of utsavam. 9&10th day celebrations are most famous. Elephant Processions, Fire works, Stage shows etc. are majour events attracts thousands of devotees and others

The churches here celebrate grand annual feasts, an occasion to regale and rejoice. The 'Arthunkal Perunnal' is celebrated at the Arthunkal Church. The famous regatta forms part of many festivals here at many places. Annual Vallam Kali (Nehru Trophy Boat Race) is held in the backwaters in the month of September associated with the Onam festival. The main attraction is the Chundan Vallam (Snake Boat) race, in which a number of contestants are in the run for the famous Prime Minister's trophy, a trophy donated by Jawaharlal Nehru, the first Prime Minister of India. Another important celebration in Alappuzha is "Beach Festival" held from December 30 to January 2.The annual festival conducted in Champakulam "Valiya Palli" ia another big festival. 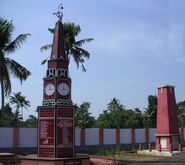