In 1944 he fled from Romania to Hungary, and then joined the fleeing Wehrmacht forces and ended up in Germany, then emigrated to the U.S. After World War II, he was condemned as a war criminal by the Romanian People's Tribunals, however, United States authorities refused to extradite Wass to Romania claiming the lack of solid evidence.[1]

The works of Albert Wass first gained recognition within Hungarian literature from Transylvania in the 1940s. In 1944 he moved to Germany and later in 1952 to the United States, and lived there till his death. During the communist regime his books were banned both in Hungary and in Romania. Part of his works were published in Hungary after the change of political system in 1989, however, before this time, his works were unknown to Hungarian public.

He is popular among the Hungarian minority in Romania[2] and has a growing popularity in Hungary. In 2005 in a public assessment (Nagy Könyv), he was found to be one of the most popular Hungarian authors: his book "A funtineli boszorkány" (The Witch of Funtinel) was named the 12th most popular book; two more books were named in the top 50 ranking, including the family saga "Kard és kasza" (Sword and Scythe).

The Wass family has traced its descent from the age of Árpád, and is one of the oldest noble families in Transylvania.[3] The family received the title of count from Maria Theresia in 1744.[4]

His grandfather, Béla Wass, was a parliamentarian and Lord Lieutenant (főispán) of Szolnok-Doboka county.[5] His father was Count Endre Wass (1886–1975), his mother Baroness Ilona Bánffy of Losonc (now Lučenec, Slovakia) (1883–1960).

Albert Wass was born in Válaszút (today Răscruci) at Bánffy castle. His parents divorced early, and was mostly brought up by his grandfather, Béla Wass.[7] He received his baccalaureate from the Reformed Church Secondary School in Cluj on Farkas Street and subsequently earned a diploma of forestry from the Academy of Economics in Debrecen, Hungary. He continued his studies of forestry and horticulture in Hohenheim, Germany and Sorbonne, France, where he received additional diplomas. He returned to Transylvania in 1932, as his father fell ill, then he had to attend obligatory military service in Romanian Army, later settled to run the family estate in the Transylvanian Plain.

His first wife was his cousin Baroness Éva Siemers (1914–1991) of Hamburg. "Due to pressure from my family, I had to marry my cousin in 1935 (...) this was the only way to avoid bankruptcy of the family lands", Wass wrote later.

He had six children (Vid, Csaba, Huba, Miklós, Géza, Endre); Csaba died at age 3. Huba Wass de Czege, born in 1941 in Kolozsvár (now Cluj-Napoca, Romania) [8] had a significant career in the U.S. Army, achieving rank of brigadier general. He is known as a principal designer of the "AirLand Battle" military doctrine.,[9] and took part in the planning of Desert Storm against Iraq in 1991.

After the Second Vienna Award (30 August 1940), northern Transylvania was reassigned to Hungary, so in 1941, Wass was nominated as primary forest monitor in the Ministry of Agriculture for the area near Dés (now Dej).

From May 1942 he took part in military training of Cavalry of Hungary as a reserve officer, achieving rank of ensign. In his memoirs, Wass claims to have become chief editor in Ellenzék in May 1943, as his boss was drafted to the army, he writes:

two soldiers of Gestapo entered the editorial, showing the order they have to monitor the newspaper. I simply left the building, and walked up the mountains. Two weeks later, my father sent me a message that the Germans are looking for me. To avoid conflict, General Veress, the commander of military troops in North Transylvania has given me a uniform, and as master sergeant he sent me to Ukraine with 9th Hungarian Cavalry, from which I returned only at Christmas.

Wass became the aide-de-camp of General Lajos Veress in 1944. As the war was drawing to the end, the Soviet (and later Romanian) troops were drawing forward into Transylvania, as an officer, he did not wait for the reoccupation of North Transylvania, but on the Easter of 1945, crossed the border and chose emigration.

In May 1946, both Wass and his father, Endre Wass, were sentenced to death in absentia by a Romanian tribunal for ordering the killing of Romanian peasants from Sucutard and Mureșenii de Câmpie and their possessions were confiscated,[8][10] by Romanian People's Tribunal, a tribunal set up by the post-World War II government of Romania, overseen by the Allied Control Commission to trial suspected war criminals, in line with Article 14 of the Armistice Agreement with Romania.[11][12] The tribunal were to a large extent set up on the model of the Nürnberg International Tribunal.[13] They accused for events that happened in September 1940, during the march in of the Hungarian forces to North Transylvania, when a Hungarian lieutenant, Pakucs, arrested six inhabitants (a Romanian priest and his family, and his Hungarian servant, and Romanian peasants, and a local Jewish merchant and his family) of Sucutard, and then shot to death two Romanian men and two Jewish women, Eszter and Róza Mihály in Ţaga (Czege), at the order the Albert and Endre Wass, when they allegedly attempted to escape.[8][14] Albert Wass was also accused for, as the alleged instigator, for the shootings at Mureşenii de Câmpie, when Hungarian soldiers, led by Lieutenant Gergely Csordás, killed 11 Jews.[8] Wass defended himself as not present at the killings.

Romanian authorities tried several times to have him extradited to Romania, however in 1979, after several revisions, the U.S. Department of Justice refused the petition due to lack of evidence. This was confirmed even after the Wiesenthal Center denounced him, as he was among the people who were accused of killing Jews. After the analysis of the case, the U.S. dropped the charges against him. Wass continued to insist that he had nothing to do with the killings, and claimed he was the victim of a "Zionist-Romanian" conspiracy.[15]

Albert Wass claimed several times that the secret police of Communist Romania, the Securitate, was trying to assassinate him, but he was not able to prove it. In 1986, he shot a film on bullet marks allegedly trying to kill him, but no solid evidence was found to link it to the Securitate. The two perpetrators of that attempt had been arrested by American police, but they were released on account of their Romanian diplomatic passport.

First traveling to Sopron, he then moved onward to Bleichbach and Hamburg, Germany, and lived there till 1952, where the family of his first wife, Éva Siemers, had been living. He found a job as a nightwatchman at a construction site.

In 1951, Wass emigrated to the United States, together with four of his sons (Vid, Huba, Miklós and Géza).[8] Due to pulmonary disease, his wife was unable to receive approval for emigration from the US administration and was subsequently left behind in Germany with their other son Endre. The couple later divorced.

He founded the American Hungarian Guild of Arts, managing its academic work and publishing activities, and editing its newsletter. He launched his own publishing house, the Danubian Press, which published not only books but English language magazines of the American Hungarian Guild of Arts, too. The Transylvanian Quarterly dealing with Transylvania and related issues, then the Hungarian Quarterly undertaking the general problems of the Hungarian nation became the most important anti-Bolshevik forum of Hungarian exiles.

Wass's application for naturalization in Hungary was first refused by the government between 1994 and 1998, as his death sentence in Hungary had not been revoked, then impeded by a reply that the naturalization certificate of the 90-year-old author would have been valid for only a year from the date of issue.

Wass committed suicide on February 17, 1998 at age 90 in his Florida residence after a long struggle with a medical condition. His final wish was to have his remains placed in the garden of Kemény villa in Brâncoveneşti, Mureş County, next to the tomb of János Kemény.

It was a long debate in the Hungarian press that Albert Wass has not received Hungarian citizenship, nevertheless of his several application, with an explanation that he became again Romanian citizen after Paris Peace Conference.

In 2007, Hungarian members of parliament István Simicskó (KDNP, Christian Democrats) and Mihály Babák (Fidesz, Young Democrats) have asked president László Sólyom to grant Albert Wass citizenship posthumously, but were replied that this is not possible for several reasons, for example, he has already received citizenship in 1997, so the writer has died as Hungarian, [3], however, the certificate of citizenship (but not the citizenship itself) was valid only for one year and was offending him so he refused it.[17]

In recent years, some representatives of the Hungarian minority in Romania and his family attempted his rehabilitation. His son's request for a retrial of the case was rejected by the Romanian High Court of Cassation and Justice in 2007.[18]

His life has never been examined thoroughly on court, so as a consequence it is a predominant view among Romanians that Albert Wass is a criminal, responsible for the murdering of Romanians and Jews and his condemnation by the Tribunal is just. The rehabilitation attempts are seen as immoral particularly by relatives of those he was accused of murdering.[19]

On May 22, 2004, a statue was unveiled in Odorheiu Secuiesc bearing no name, only the Hungarian inscription "Vándor Székely" (Wandering Szekler). The sculptures was interpreted in the Romanian press as being of Albert Wass. Two statues of Wass have been moved to the interior of the Hungarian churches in Reghin and Lunca Mureșului.

Although Romanian law forbids the cult of those condemned for "offence against peace and mankind or promoting fascist, racist or xenophobe ideology",[20][21] it should be noted that some Romanian localities predominantly inhabited by Hungarian ethnics still retain commemorative statues of Albert Wass. They argue the Supreme Prosecutor's Office of Romania on 21. June 2004 in written declared - in an other trial -:

"Regarding the analysis of the relevant international laws applied for war crimes and offence agains peace and mankind that also Romania ratified (Geneva Conventions 12. 08. 1949 - "...") the conclusion is the activities of Albert Wass convict are not belonging to those crimes that are summarized in these international conventions. Conclusion: "..." Albert Wass was not condemned for offence against peace and mankind" [22][23]

In an other trial, a person was charged because he put a statue on his own yard in Sovata. Finally he was released from the charge and the authorities were obligated to restore the statue to its original place.[24][25]

Albert Wass also has commemorative statues in several localities in Hungary, where he is considered by some on the Right to be a hero and a victim of the regime.

The representatives of the ruling Fidesz party and the radical nationalist Jobbik party together voted in early 2011 that several public squares be named after him in Budapest.

In his 1939 work Farkasverem (Wolfpit), he described how the Trianon generation found their feet again: the unity of the presentation of social reality, the quest for meting out justice in history, together with ancient language, music, rhythm conquered the hearts of many readers in Hungary. In 1939, he was elected member of the Transylvanian Literary Society and the Kisfaludy Society. In 1940, he was awarded the Baumgarten Prize the second time.

In 1942, he received the Klebelsberg Prize and in the same year on a memorable tour in Hungary he represented Transylvanian literature together with three of his peers. He was even elected member of the Hungarian Academy of Sciences as appreciation for his knowledge in forestry.

His writings were patriotic but did not exacerbate the tensions between the Romanian and Hungarian population during the re-annexation of Northern Transylvania as a consequence of the Second Vienna Award.

His fable A patkányok honfoglalása – Tanulságos mese fiatal magyaroknak ("The Conquest by the Rats - A Fable for Young Hungarians"), which tells how rats take over a house, because they are tolerated by the magnanimous landowner, is considered paradigmatic for antisemitic story-telling.[26][27][28] 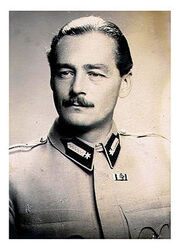