Familypedia
Register
Don't have an account?
Sign In
Advertisement
in: Jagiellon (surname), Born in 1461, Died in 1506,
and 14 more

Alexander (Polish: Aleksander Jagiellończyk; Lithuanian: Aleksandras Jogailaitis) (5 August 1461 – 19 August 1506) of the House of Jagiellon was the Grand Duke of Lithuania and later also King of Poland.[1] He was the fourth son of Casimir IV Jagiellon. He was elected Grand Duke of Lithuania on the death of his father (1492), and King of Poland on the death of his brother Jan I Olbracht (1501).

Alexander's shortage of funds immediately made him subservient to the Polish Senate and nobility (szlachta), who deprived him of control of the mint (then one of the most lucrative sources of revenue for the Polish kings), curtailed his prerogatives, and generally endeavored to reduce him to a subordinate position. For want of funds, Alexander was unable to resist the Grand Master of the Teutonic Knights or prevent Grand Duke of Muscovy Ivan III from ravaging Grand Duchy of Lithuania with the Tatars. The most the Grand Duke of Lithuania could do was to garrison Smolensk and other strongholds and employ his wife Helena, the Tsar's daughter, to mediate a truce between his father-in-law and himself after the disastrous Battle of Vedrosha (1500). In the terms of the truce, Lithuania had to surrender about a third of its territory to the nascent expansionist Russian state.

During his reign, Poland suffered much humiliation at the hands of her subject principality, Moldavia. Only the death of Stephen, the great hospodar of Moldavia, enabled Poland still to hold her own on the Danube River; while the liberality of Pope Julius II, who issued no fewer than 29 bulls in favor of Poland and granted Alexander Peter's Pence and other financial help, enabled him to restrain somewhat the arrogance of the Teutonic Order.

Alexander Jagellon never felt at home in Poland, and bestowed his favor principally upon his fellow Lithuanians, the most notable of whom was the wealthy Lithuanian magnate Michael Glinski, who justified his master's confidence by his great victory over the Tatars at Kleck (5 August 1506), news of which was brought to Aleksander on his deathbed in Vilnius. There is some evidence that he had at least one son, leading to a surviving Jagiellonian branch, although this is not conclusive.

It is important to note that Alexander was the last known ruler of the Gediminids dynasty to have maintained the family's ancestral Lithuanian language. From his death, Polish became the sole language of the family, thus fully Polonising the Jagiello family.

In 1931, during the refurbishment of Vilnius Cathedral, the forgotten sarcophagus of Alexander was discovered, and has since been put on display. 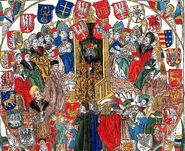 Gothic St. Anne's Church in Vilnius was constructed on his initiative in 1495-1500.

In 1504 he ordered to rebuild the Wawel in a Renaissance style.[2]

Sarcophagus of Alexander of Poland in the cathedral of Vilnius

This article incorporates text from the Encyclopædia Britannica Eleventh Edition, a publication now in the public domain.

Wikimedia Commons has media related to:
Alexander of Poland 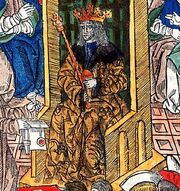