Familypedia
Register
Don't have an account?
Sign In
Advertisement
in: Of Wessex (surname), Born in 849, Died in 899,
and 15 more

King Alfred (or more properly Ælfred) is the only English king ever to receive the title "The Great" which epithet he earned for his stalwart resistance to the Danes, his wise government, his law-making, and his revival of English arts and culture and education. He was the first King of Wessex to be called "King of England". Reign: 871-899.

He was of the royal English dynasty called House of Wessex, a family originating in the southwest corner of England and gradually increasing in power and prestige. The House became rulers of all the country with the reign of Alfred the Great in 871 and they lasting until Edmund Ironside in 1016. This period of the English monarchy is known as the Saxon period.

Young Alfred probably never expected to be king, being the fifth son of King Athelwulf of Wessex, and he even had three brothers precede him to the kingship.

Young Alfred made two trips to Rome, first in 853 and again in 855, where his father sought the blessings of the pope (Pope Leo IV (847-855)))and the Christian church in his ongoing battles against the pagan Danes. Legend has it that during one of these visits, the pope anointed him to be a great ruler. During these trips he spent some time with the court of Charles the Bald (823-877) and learned much about the grandeur of Charles's grandfather, Charlemagne (747-814).

In the mid 860's a Danish 'Great Army' under Ivar the Boneless invaded eastern England and occupied Northumbria. At first their attention was directed northwards against Mercia and Northumbria and they made many conquests there.

In 871, the Danes turned their attention towards Wessex and the armies of Alfred and his brother Æthelred of Wessex (c847-871), and thus began the great "Year of Battles". During the course of these battles Athelred died and Alfred became King. By this time Alfred was a highly experienced military leader.

After a major battle at Wilton in May 871, a peace was made between Wessex and the Danes, who turned their attention back northward. They returned to do battle in the late 870s under Guthrum and again in the 890s under Haesten.

But as he grew older and wiser, Alfred adopted more cautious tactics and stronger defences for holding back the Danes. He would besiege their fortifications, conduct guerrilla warfare on their transports, and build up the local militia in each shire.

Most famously, Alfred built a fleet of warships and is traditionally regarded as the father of the English Navy. (He is also called the father of the American navy, which named itsfirst revolutionary warship, USS Alfred, for him.)

From Treaty of 889, setting the border between English and Danelaw:

"This is the peace which King Alfred and King Guthrum...have agreed on...First concerning our boundaries: up the Thames, and then up the Lea, and along the Lea to its source, then in a straight line to Bedford, then up the Ouse to the Watling Street."

In 868, Alfred married Ealhswith (c852-905), daughter of a Mercian nobleman, Æthelred Mucil, Ealdorman of the Gaini. The Gaini were probably one of the tribal groups of the Mercians. Ealhswith's mother, Eadburh, was a member of the Mercian royal family.

They had five or six children together, including Edward the Elder (c870-924), who succeeded his father as king, Æthelflæd (c872-918), who became Lady (ruler) of the Mercians in her own right, and Ælfthryth of Wessex (c872-929), who married Baldwin II the Count of Flanders. In 2008 the skeleton of Queen Eadgyth, granddaughter of Alfred the Great, was found in Magdeburg Cathedral in Germany. It was confirmed in 2010 that these remains belong to her — one of the earliest members of the English royal family.

Osferth was described as a relative in King Alfred's will and he attested charters in a high position until 934. A charter of King Edward's reign described him as the king's brother, "mistakenly" according to Keynes and Lapidge; however, in the view of Janet Nelson, he probably was an illegitimate son of King Alfred. 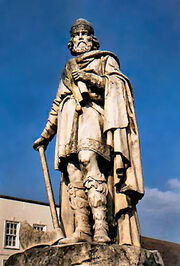