Familypedia
Register
Don't have an account?
Sign In
Advertisement
in: Thompson (surname), Born in 1763, Died in 1849,
and 5 more

Wife of US Statesman

Her husband Elbridge Thomas Gerry (1744-1814) was a Harvard educated wealthy merchant who served in both the Massachusetts state legislature and the national Congress. He signed both the Declaration of Independence and the Articles of Confederation. However, he constantly opposed measures leading to an overly strong centralized government and quit the Convention at the very end after failure of his proposal to include the Bill of Rights into the Constitution itself. He would later become famous as 5th Vice President of the US (under Madison) and namesake for the political term of "gerry-mandering". He is the only signer of the Declaration of Independence who is buried in Washington, DC. 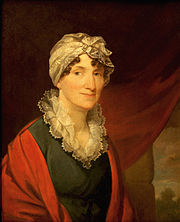