listen; /əˈrʌndəl/), also notated as AA or A.A. County, is located in the U.S. state of Maryland. As of the 2020 United States census, its population was 588,261,[1] an increase of just under 10% since 2010. Its county seat is Annapolis,[2] which is also the capital of the state. The county is named for Lady Anne Arundell (1615–1649), a member of the ancient family of Arundells in Cornwall, England, and the wife of Cecilius Calvert, 2nd Baron Baltimore (1605–1675), founder and first lord proprietor of the colony Province of Maryland.

The county was named for Lady Anne Arundell, (1615/1616–1649), the daughter of Thomas Arundell, 1st Baron Arundell of Wardour, members of the ancient family of Arundells in Cornwall, England. She married Cecilius Calvert, second Lord Baltimore, (1605–1675), and the first lord proprietor of the colony, Province of Maryland, in an arranged marriage contract in 1627 or 1628.

Anne Arundel County (modern spelling adds an 'e' to her first name of "Ann" and removes the second 'L' from the family name of "Arundell" – but the old traditional spelling of her name is still used in the title of the local historical society, the Ann Arundell County Historical Society) was originally part of St. Mary's County, the province's first erected county in the southern portion of the Province of Maryland, which had first been established by arriving settlers in 1634. In 1650, the year after Lady Ann Arundell's death, the county separated from St. Mary's and "erected" into its own jurisdiction and became the third of the 23 Maryland counties. It was composed of the hundreds of Town Neck, Middle Neck, Broad Neck, South River, West River, and Herring Creek.[3] Between 1654 and 1658, the county was known as "Providence" by many of its early settlers.

On March 25, 1655, during the English Civil War, (1642-1651), in Europe, the Battle of the Severn, the first naval colonial battle ever fought in America, was fought in Anne Arundel County on the Severn River between Puritan forces supporting the Commonwealth of England and forces loyal to

In 1692, the Church of England, also known as the Anglican Church, became the established church of the Province of Maryland through an Act of the General Assembly. Ten counties had been established in the colony, and those counties were divided into 30 parishes, with vestrymen appointed within each. Ann Arrundell County was divided into four parishes: Herring Creek, South River, Middle Neck, and Broad Neck.[4]

Between 1694 and 1695, the provincial capital of Maryland was moved from St. Mary's City along the northern shore of the Potomac River across from the southern colonial border with the Province of Virginia in St. Mary's County farther north along the western shore of the Chesapeake Bay, midway in the colony to Annapolis in Anne Arundel County. Prior to the move, Annapolis was known as "Providence".[5]

During the War of 1812, the one of the original six heavy frigates of the recently re-established United States Navy, "U.S.S. Constitution sailed from Annapolis prior to its victorious engagement with the H.M.S. Guerriere of the British Royal Navy.

On May 22, 1830, the inaugural horse-drawn train of the Baltimore and Ohio Railroad travelled the 13 miles (21 km) of the newly completed track from Mount Clare Station in southwestern Baltimore City to Ellicott Mills, (now Ellicott City), then in the Western or Howard District (now Howard County) of Anne Arundel County. This was the first regular railroad passenger service in the United States.[6] In 1831, land west of the railroad was considered the Howard District of Anne Arundel County. In 1851, The Howard District was broken off to form Howard County, now the 21st county in Maryland (of 23).[7]Template:Discuss

The county has a number of properties on the National Register of Historic Places.[8]

Most of the county's borders are defined by water. To the east lies the western shore of the Chesapeake Bay, and numerous tidal tributaries of the bay indent the shoreline, the various rivers, creeks, streams, inlets forming prominent peninsulas, also known as "necks" (as further south in Virginia). The largest of these tributaries include (from north to south), the Magothy River, Severn River, South River, and the West River. Further south, the upper Patuxent River forms the border of Anne Arundel with Prince George's County to the west. Deep Run forms part of the northwestern border with Howard County, and Lyons Creek forms part of the southern border with Calvert County. The Patapsco River to the north is the border with Baltimore County, but the communities and areas of Brooklyn and Curtis Bay neighborhoods (and adjacent Fairfield, Wagner's Point [also known as East Brooklyn], Arundel Cove [off of Curtis Creek], and Hawkins Point), lying south of the Patapsco River were annexed from Anne Arundel County to Baltimore City in the third major annexation of January 1919.[11]

Anne Arundel County originally included all of the land between the Patuxent River and the Patapsco River (mainstem and South Branch) upstream to their headwaters on Parr's Ridge. The northwestern section of this long tract later became Howard County, with the border between the two running very close to the Atlantic Seaboard fall line. As a result, Anne Arundel County lies almost entirely within the Atlantic Coastal Plain, while Howard County is almost entirely within the Piedmont province.

Elevations in Anne Arundel County range from sea level at the Chesapeake and tidal tributaries to about 300 feet (91 m) in western areas near the fall line.[12] The terrain is mostly flat or gently rolling, but more dramatic banks and bluffs can be found where waterways cut through areas of higher elevation.

With the exception of the very limited extent of Piedmont underlain by Precambrian to early Paleozoic metamorphic rock, all of the county is underlain by thick deposits of gravel, sand, silt, and clay dating from the early Cretaceous to Holocene times.[13] Most of these sediments are unconsolidated but include local formations of sandstone, especially in the Pasadena area.[14]

Anne Arundel County has a humid subtropical climate, with hot summers and cool winters. Annual precipitation averages around 40 in (100 cm) per year throughout the county, with a fairly even distribution throughout the year. Annual snowfall totals around 20.1 in (51 cm) on average at BWI Airport, which has an elevation of 47.5 m (156 ft) above sea level.[15] Slightly colder winter temperatures and higher snowfall are experienced at the higher elevations, with slightly lower snowfall closer to sea level.[16] According to the most recent USDA Hardiness zone maps, the lowland areas of the county fall into Zone 7b, with an expected annual minimum temperatures of 5 to 10 °F (-15 to -12 °C), while higher areas fall into Zone 7a, with expected annual minima of 0 to 5 °F (-18 to -15 °C).[17]

Anne Arundel County has had a charter government since 1965. The government consists of a county executive and a seven-member county council. These members are elected in the same years Maryland conducts its gubernatorial and legislative elections, and may serve a maximum of two consecutive terms.

The Democrats have the most registered voters in the county, but the large number of Republican-leaning independents means Republicans win more county-wide elections than in other mostly suburban counties in Maryland, but Democrats are the dominant party in Annapolis city elections. In the 2016 presidential election, Anne Arundel County voted for Hillary Clinton over Donald Trump by 6,016 votes.[18] It was the first time that the county had supported a Democrat for president since 1964. Four years later, Joe Biden won the county by nearly 15%, the largest margin of victory for a Democrat in the county since the landslide election of Lyndon Johnson in the 1964 presidential election.[19]

The County Council, as the legislative branch, adopts ordinances and resolutions, and has all of the County's legislative powers. The most recent county election occurred November 6, 2018. Democrats held their three seats and picked up the District 2 seat, giving them a 4–3 majority.

According to the Maryland Department of Business and Economic Development, the following were the principal employers in the county in November 2014 (excluding U.S. post offices and state and local governments, but including public institutions of higher education).[32]

The Maryland House of Correction, operated by the Maryland Department of Public Safety and Correctional Services, was located in Anne Arundel County. The prison was closed in 2007.[39]

The Maryland Department of Public Safety and Correctional Services operates several additional correctional facilities in the unincorporated town of Jessup in Anne Arundel County, including:

Fort George G. Meade is a large U.S. Army post located in the northwest of the county. It is the home of the National Security Agency.

The Naval Academy is located in Annapolis.

Anne Arundel County is the home of Baltimore-Washington International Thurgood Marshall Airport, commonly referred to as BWI. BWI serves as the main airport for greater Baltimore. It is also an increasingly popular alternative airport to residents of the Washington, D.C., area. BWI is an East Coast hub for Southwest Airlines, meaning that direct flights are available between BWI and much of the country.

Sandy Point State Park is located at the end of the Broadneck peninsula near the west end of the Chesapeake Bay Bridge. It features a beach and marina and hosts many festivals and special events throughout the year.[41] Helen Avalynne Tawes Garden is located at the Department of Natural Resources headquarters in Annapolis. The 5 acre garden features representations of the state's various geographic areas.[42] The county also contains some of the easternmost portions of Patapsco Valley State Park, consisting of mostly undeveloped areas of forest and wetlands along the lower Patapsco River.[43]

Other attractions include the Maryland Renaissance Festival in Crownsville, the Maryland State House and the Colonial Annapolis Historic District.

Anne Arundel County is home to the two largest shopping malls in the State of Maryland: Westfield Annapolis Mall and Arundel Mills in Hanover in addition to Marley Station Mall in Glen Burnie. Adjacent to Arundel Mills is the Maryland Live! casino. 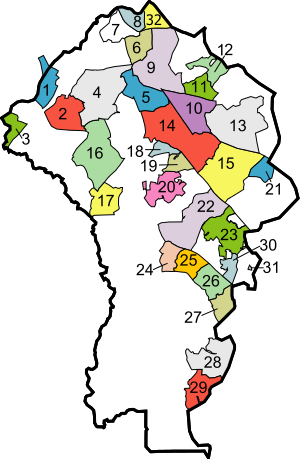