Familypedia
Register
Don't have an account?
Sign In
Advertisement
in: Marbury (surname), Born in 1591, Died in 1643,
and 21 more

AKA: Anne Hutchinson - Famous Early New England Puritan Leader, mother of 15, and important participant in the Antinomian Controversy that shook the infant Massachusetts Bay Colony from 1636 to 1638. The Hutchinson River is named after her. 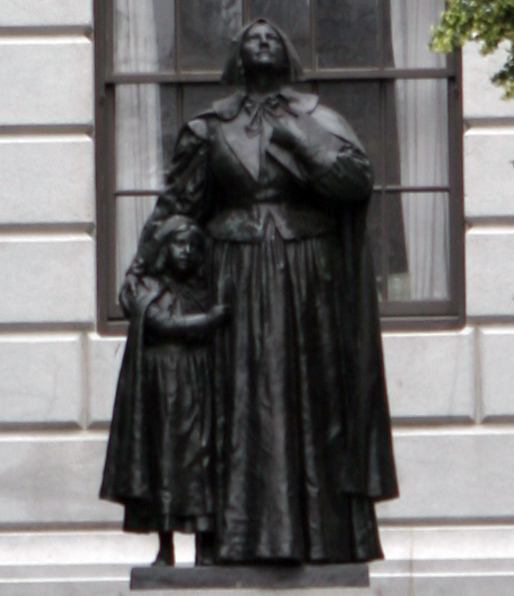 Reverend John Cotton was Anne Hutchinson's mentor, and her reason for immigrating to New England.

In 1634, 43-year old Anne Hutchinson, her 48-year old husband William, their other ten living children, aged about eight months to 19 years, and William's aged mother, Susanna, set sail from England aboard the Griffin, the same ship that carried Cotton and their oldest son to New England a year earlier.

In 1636-1638, Massachusetts Bay Colony, this family were Free Grace Advocates (AKA: Antinomian Controversy) which caused great religious and political strife in the colony. It pitted most of the colony's ministers and magistrates against some adherents of the Free Grace theology of Puritan minister John Cotton. The most notable Free Grace advocates, often called "Antinomians", were charismatic Anne Hutchinson, her brother-in-law Reverend John Wheelwright, and Massachusetts Bay Governor Henry Vane. In the summer of 1637 their opponents led by Gov John Winthrop won back political control of the colony. The following trial led to the banishment many of the leaders of this movement.

Because of religious turmoil, in 1642 the family left New England for the Dutch colony of New Netherland, located in what is today Bronx, New York.

Anne and her family were killed during a fampage by Siwanoy Indians through the Netherland Colony in 1643. Only their daughter Susanna, age 9, survived.

Ann and Will had 15 children, all except the last one were born and baptised in Alford, Lincolnshire.