Arunah Shepherdson Abell was an American publisher and philanthropist from New England who was active in Pennsylvania and Maryland. Born in East Providence, Rhode Island, Abell learned the newspaper business as an apprentice at the Providence Patriot. After stints with newspapers in Boston and New York City, he co-founded the Public Ledger in Philadelphia and later independently founded the The Sun of Baltimore, Maryland; both were penny papers to appeal to the working class. Abell and his descendants continued ownership of The Sun as a family business until 1910.

Abell is noted as an innovative publisher in the newspaper business, making use of new systems and technology: pony express delivery of news from New Orleans, using the telegraph to transmit news from the first Mexican-American War and a President's speech to the Congress in Washington, D.C., and using the new rotary/cylinder printing press invented by Richard March Hoe. 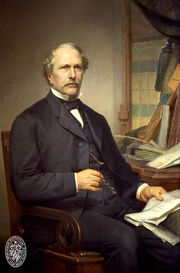