Familypedia
Register
Don't have an account?
Sign In
Advertisement
in: Counties of Ohio, Auglaize County, Ohio, 1848 establishments in Ohio,
and 2 more

The county is named for the Auglaize River. Some sources say it is a corruption of the French description of the clay (glaise) water (eau);[5] others say it comes from a Native American word for fallen timbers.[1][6] Another remote possibility is that it derives from the French glace [*aux glaces?], meaning "mirror" or "ice" ['at the ices'?].[7]

There is something to be said for the unattested eau glaise ("clay water"), like the attested terre glaise ("clay soil"), but Ramsey[8] and Stewart[9] agree that Auglaize (and variants, implying "*aux glaises") is American French for "at the lick(s)", literally "at the clays", where wild beasts came to lick salt and minerals from the soil, filling the lacuna in standard French for a salt lick. The spelling "glaize" is archaic (as in Cotgrave's French-English dictionary of 1611). In addition, in Arkansas there is a creek and mountain Glazypeau, from French glaise à Paul ("Paul's lick"). The assumed indigenous American (Algonquian) "fallen timbers" or "overgrown with brush" has no support without any attested etymons supplied and would not match phonetically in the case of Shawnee.

The county is crossed by the Auglaize River and the Miami and Erie Canal. The headwaters of the Saint Marys River, the Great Miami River and the Scioto River as well as parts of Grand Lake St. Marys and Lake Loramie are in the county.[11]

Auglaize County is governed by an elected Board of Commissioners.

The county's first courthouse, built in 1851 for $11,499, was in use until 1894, when the current courthouse opened. Occupying an entire city block, the courthouse and its adjacent powerhouse cost $259,481. Some 85 men took 18 months to construct it, starting on July 2, 1893. Built of Berea sandstone with tile floors, the courthouse was highly fire-resistant. The boilers for heating and power generation, a significant cause of fire at the time, were in a separate powerhouse. Steam-driven dynamos produced the electricity that, along with steam for heating and hot water, was fed to the building via an underground conduit. The courthouse marked its centennial in 1994, and remains the seat of the county's courts,[23] along with the much newer West Municipal Court in St. Mary's.[24] 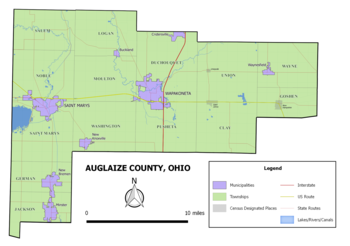