Bârlad (Romanian pronunciation: [bɨrˈlad]) is a city in Vaslui County, Romania. It lies on the banks of the Bârlad River, which waters the high plains of eastern Moldavia.

At Bârlad the railway from Iaşi diverges, one branch skirting the river Siret, the other skirting the Prut; both reunite at Galaţi. Along with a maze of narrow and winding streets, Bârlad features several notable modern buildings, including the hospital administered by the Saint Spiridion Foundation of Iaşi.

In the vicinity of the city there are traces of a Roman camp. 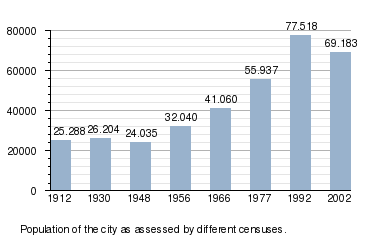 Rulmentul Bârlad is a rugby team from the city, currently playing in the first rugby league in Romania. One of the pioneers of rugby in Romania, the first team was created in 1956 under the name of CONSTRUCTORUL, meaning the "builder" in Romanian. C.S. RULMENŢI S.A. Bârlad was formed later on in 1962, competing in the first tier of the Romanian rugby division ever since. The team colours are white and blue. Notable performances are the winning of the 1986 and 1987 F.R.R cup (Romanian cup).

Fepa 74 Bârlad was the city's football team, changing its name to FC Bârlad. Its best performance was promotion in the second tier of Romanian football championship in mid-1980s.