Barron William Trump (born March 20, 2006) is Donald Trump's youngest child and his only child with Melania Trump. He is of German and Scottish descent on his father's side and Slovenian descent on his mother's side. In May 2006, Barron Trump received the Christian sacrament of baptism at The Episcopal Church of Bethesda-by-the-Sea in Palm Beach, Florida. He attended the Columbia Grammar & Preparatory School in Manhattan. Barron is fluent in English and Slovene. During his early childhood, Barron made several television appearances, including on The Apprentice and The Oprah Winfrey Show. Barron did not immediately move into the White House but remained at Trump Tower with his mother, until the end of the 2016–2017 school year. Melania and Barron moved to the White House on June 11, 2017. He will attend St. Andrew's Episcopal School in Potomac, Maryland.

He made rare appearances during the 2016 election, owing to his mother's desire to keep him out of the spotlight. He made a total of three public appearances on the campaign trail, appearing at a campaign rally in South Carolina, and attending his father's RNC acceptance speech and presidential victory speech. While absent from pre-inauguration events, he was at his father's inauguration ceremony in January 2017 and some of the following events. 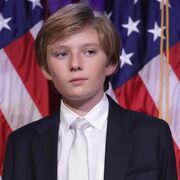