Familypedia
Register
Don't have an account?
Sign In
Advertisement
in: Harrison (surname), Born in 1833, Died in 1901,
and 33 more

Edit Facts
Benjamin Harrison (August 20, 1833 – March 13, 1901) was the twenty-third President of the United States, serving one term from 1889 to 1893. He had previously served as a senator from Indiana. His administration is best known for a series of legislation including the McKinley Tariff and federal spending that reached one billion dollars. Democratic Party (United States) attacked the "Billion Dollar Congress" and defeated the GOP in the United States House election, 1890, as well as defeating Harrison's bid for reelection in 1892. He is to date the only president from Indiana. 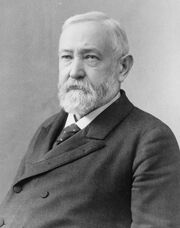