Benson County is a county in the U.S. state of North Dakota. As of the 2020 census, the population was 5,964.[1] Its county seat is Minnewaukan.[2] The county was created on March 9, 1883[3] by the Dakota Territory legislature, and was named for Bertil W. Benson, a Dakota Territory legislator at the time. The county government was organized on June 4, 1884, and its boundary lines were altered by two legislative actions in 1885.[4]

White Horse Hill National Game Preserve and much of the Spirit Lake Indian Reservation are located within the county.

Much of the east boundary line of Benson County is delineated by the shore of Devils Lake, a closed-capture lake which would spill into the Sheyenne River in an overflow condition. The North Fork Sheyenne River flows southeasterly through the lower SW portion of the county. 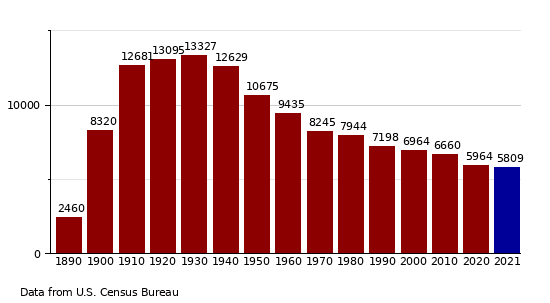 Cities and CDPs have population included as of 2020, and townships have the population as of 2020. The largest community by far is Fort Totten, followed by Leeds, Maddock and the county seat, Minnewaukan. There are nine cities in the county. The largest township by a 60% margin is Mission (935), which is on the south shore of Devils Lake and is popular for vacationing, as well as gambling at the Spirit Lake Casino and Resort. It is within the Spirit Lake Indian Reservation. It is followed by Wood Lake Township (471), immediately to the south of Mission Township and also included in the reservation. The third largest is Lallie Township (325), to the west of Fort Totten on the south shore of Devils Lake and within the reservation.

Typical of many counties in the state where a significant share of the population is Native American, Benson County leans Democratic in presidential elections. Prior to 2020, no Republican candidate had won the majority of the county's votes since Ronald Reagan in 1984. However, George W. Bush in 2000 & Donald Trump in 2016 both won a plurality of the county's votes.