Familypedia
Register
Don't have an account?
Sign In
Advertisement
in: Acosta (surname), Born in 1895, Died in 1954,
and 3 more

Bertrand Blanchard Acosta (January 1, 1895 – September 1, 1954) was an aviator who flew in the Spanish Civil War and was known as the Bad Boy of the Air. He was a heavy drinker, was divorced twice and received numerous fines and suspensions for flying stunts such as flying under bridges or flying too close to buildings.

Acosta was born on January 1, 1895 in San Diego, California.

He attended the Throop Polytechnic Institute in Pasadena, California from 1912 to 1914.

He taught himself to fly in August of 1910 and built experimental airplanes up until 1912 when he began work for Glenn Curtiss as an apprentice on a hydroplane project. In 1915 he worked as a flying instructor. He went to Canada and worked as an instructor for the Royal Flying Corps and Royal Naval Air Service in Toronto. In 1917 he was appointed chief instructor, Aviation Section, U.S. Signal Corps at Hazelhurst Field, Long Island.

Acosta was married in 1918 but he divorced his first wife in 1920. He won the The Pulitzer Trophy Race in 1921, then married Helen Belmont Pearsoll, on August 3, 1921. In 1925 he was a lieutenant in the U.S. Navy and was living at 1 Winslow Court in Naugatuck, Connecticut. He and Helen separated but they never divorced.

Engineer Giuseppe M. Bellanca of the Columbia Aircraft Corporation had conditioned an elderly yellow-winged monoplane with one Wright motor, and scouted around for pilots. Lieut. Leigh Wade, round-the-world flyer, declined the invitation, saying Mr. Bellanca's plans were too stunt-like, not scientific. Shrugging, Mr. Bellanca engaged Pilots Clarence Duncan Chamberlin and burly Bert Acosta, onetime auto speedster, to test his ship's endurance. Up they put from Mitchel Field, Long Island, with 385 gallons of ethylated (high power) gasoline. All day they droned back and forth over suburbia, circled the Woolworth Building, hovered over Hadley Field, New Jersey, swung back to drop notes on Mitchell Field. All that starry night they wandered slowly around the sky, and all the next day, and through the next night, a muggy, cloudy one. Newsgatherers flew up alongside to shout unintelligible things through megaphones. Messrs. Acosta and Chamberlain were looking tired and oil-blobbed. They swallowed soup and sandwiches, caught catnaps on the mattressed fuel tank, while on and on they droned, almost lazily (about 80 m.p.h.) for they were cruising against time. Not for 51 hours, 11 minutes, 25 seconds, did they coast to earth, having broken the U.S. and world's records for protracted flight. In the same time, conditions favoring, they could have flown from Manhattan to Vienna. They had covered 4,100 miles. To Paris it is 3,600 miles from Manhattan. Jubilant, Engineer Bellanca's employers offered competitors a three-hour head start in the race to Paris. The Bellanca monoplane's normal cruising speed is 110 m.p.h. She would require only some 35 hours to reach Paris—if she could stay up that long again.

On May 13, 1927, fourteen days after Charles Lindbergh's record setting transatlantic flight, Acosta flew from Long Island to France with Commander Admiral Richard Byrd aboard the America. The perhaps apocryphal story was that Byrd had to hit Acosta over the head with a fire extinguisher or a flashlight when he got out of control from drinking during their flight.

In 1936 Acosta was head of the Yankee Squadron in the Spanish Civil War with Eddie August Schneider (1911-1940) and Frederic Ives Lord.

Hilariously celebrating in the ship's bar of the Normandie with their first advance pay checks from Spain's Radical Government, six able U.S. aviators were en route last week for Madrid to join Bert Acosta, pilot of Admiral Byrd's transatlantic flight, in doing battle against Generalissimo Francisco Franco's White planes. Payment for their services: $1,500 a month plus $1,000 for each White plane brought down.

Time magazine wrote on January 04, 1937, although the attack was later determined to be propaganda:

On Christmas Eve the "Yankee Squadron" of famed U.S. aviators headed by Bert Acosta, pilot of Admiral Byrd's transatlantic flight, at the last minute abandoned plans for a whoopee party with their wives at Biarritz, swank French resort across the Spanish frontier. They decided that they would rather raid Burgos, Generalissimo Franco's headquarters. The hundreds of incendiary bombs that they dropped on White hangars and munition dumps they jokingly described as "Messages of Christmas Cheer for the boys in Burgos."

In December of 1951 Acosta collapsed in a New York City bar and was hospitalized with tuberculosis. He died at the Jewish Consumptive's Relief Society sanatorium in Colorado in 1954. He was buried in the Portal of Folded Wings Shrine to Aviation. 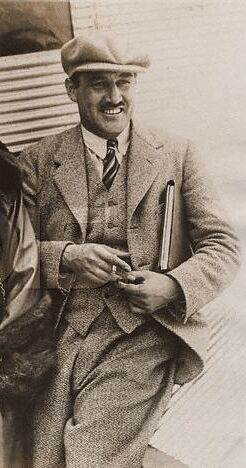