Blayney is a farming town and administrative centre with a population of 3,355 in 2011,[2] in the Central West region of New South Wales, Australia. Situated on the Mid-Western Highway about 240 km west of Sydney, 35 km west of Bathurst and 863 m above sea-level, Blayney is the seat of Blayney Shire Council.

Prior to European settlement the area was probably occupied by the Wiradjuri or Gundungara Aborigines.

The first European to travel through area was surveyor George Evans, in 1815 and unofficial occupation of the district began in 1821. The first land grant in the general area known as Coombing Park was issued to Thomas Icely in 1829.

The area that would become the town also boasted a mill, an inn and several houses by 1837, and then Governor Gipps proposed the creation of a village to be named Blayney in 1842. His proposed site however was about 9 km north-east of the present site in an area known as Kings Plains but once that spot proved unsuitable the Blayney village location was established on its present site in 1843.[3]

The arrival of the railway in 1874 boosted development and Blayney replaced Carcoar as the major service centre to local farmlands. Blayney then became a municipality in 1882 and by 1900 a butter factory and freezing works employed many within the town. An abattoir opened in 1957 and this industry was later supplemented with tanneries and a pet food plant. The abbatoirs closed in 1999.[4]

The Cadia-Ridgeway Mine is a major employer in the area.

In 1994, Blayney became home to Australia's largest inland container terminal, which is situated beside the railway station.[5]

The Blayney Wind Farm, launched in 2000, is the largest of its type in Australia. It consists of 15 wind turbine generators on elevated ridges between Carcoar Dam and Mount Macquarie. Capacity is 10 megawatts, sufficient energy to supply 3,500 Australian homes.

Blayney Valley view from the north 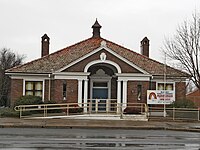 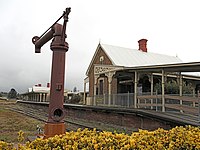