Edit
Not to be confused with The Bronx.

Bronxville is a village in Westchester County, New York, located about 15 miles (24 km) north of midtown Manhattan.[3] It is part of the town of Eastchester. The village comprises 1 square mile (2.5 km2) of land in its entirety, approximately 20% of the town of Eastchester. As of the 2010 U.S. census, Bronxville had a population of 6,323.[4] In 2016, Bronxville was rated the number one most expensive suburb around America's ten largest cities by CNBC with a median home value of $2.33 million.[5] In 2017, it was ranked 8th in Bloomberg's "America's 100 Richest Places". It was ranked 8th once again in the same Bloomberg ranking in 2018.

The region that includes the contemporary village of Bronxville was deeded to British colonists in 1666. However, it was not until the early 18th century that the area was first settled. The two founding inhabitants were the Underhill and Morgan families. The Underhills built a sawmill and a gristmill, which was the first factory in the area, on the Bronx River. There, they also constructed a wooden bridge, which gave rise to the area being known as Underhill's Crossing.[6]

Millionaire real estate and pharmaceutical mogul William Van Duzer Lawrence sparked the development of Bronxville as an affluent suburb of New York City with magnificent homes in a country-like setting.[7] The area, once known as "Underhill's Crossing", became "Bronxville" when the village was formally established. The population grew in the second half of the 19th century when railroads allowed commuters from Westchester County to work in New York City.[7] Lawrence's influence can be seen throughout the community, including the historic Lawrence Park neighborhood, the Houlihan Lawrence Real Estate Corporation, and Lawrence Hospital. John F Kennedy, the President of the United States, also resided here for a time.[8]

The village was home to an arts colony in the early 20th century during which time many noteworthy houses by prominent and casual architects were built.[9] After the Bronx River Parkway was completed in 1925, the Village expanded rapidly with the construction of several apartment buildings and townhouses much of it built by the Lawrence family. As of 1959, they continued to own or manage 97% of the rental market.[10] In both rentals and ownership, the village discouraged and effectively prohibited Jewish residency, earning the name "The Holy Square Mile."[10] James W. Loewen includes it in his book Sundown Towns, quoting the Anti-Defamation League's comment of 1959:

The Incorporated Village of Bronxville in Westchester County has earned a reputation for admitting to its precincts as home-owners or -renters only those who profess to be Christian. According to informed observers, this mile-square village, with a population of 6500, does not have any known Jewish families residing within its boundaries.… Even in the apartment buidings located in Bronxville there are no known Jewish tenants.[11]

The Gramatan Hotel on Sunset Hill was a residence hotel in the late 19th century and early 20th century.[12] Gramatan was the name of the chief of the local Siwanoy Indian tribe that was centered in the Gramatan Rock area above Bronxville Station. Chief Gramatan sold the land to the settlers. The hotel was demolished in 1970, and a complex of townhouses was built on the site in 1980.[12]

St. Joseph's Catholic Church, located in the downtown area, was attended by the Kennedys when they were residents from 1929 to about 1938 before moving to London.[15] In 1958 future-senator Ted Kennedy married Joan Bennett in St. Joseph's Church. In 1960, the Village voted 5:1 for Nixon over Kennedy.[16] 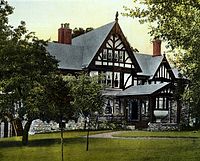 "Owl House" in the Gramatan Hill section of Bronxville (1898)

There were 2,312 households of which 40.8% had children under the age of 18 living with them, 64.4% were married couples living together, 6.2% had a female householder with no husband present, and 28.2% were non-families. 24.3% of all households were made up of individuals and 11.4% had someone living alone who was 65 years of age or older. The average household size was 2.71 and the average family size was 3.27.

Bronxville's 10708 ZIP Code covers the village of Bronxville proper, plus Chester Heights and other sections of Eastchester, parts of Tuckahoe, and Lawrence Park West, Cedar Knolls, Armour Villa, and other sections of Yonkers.[20] This brings the ZIP code's population to 22,411 (2000 census), covering an area more than twice as large as the municipality of Bronxville itself and encompassing several notable institutions, such as Sarah Lawrence College in Yonkers.[21] In fact, there are more residents of Yonkers using a Bronxville mailing address than living in the village itself.[22] The Bronxville Post Office serves residents of the village.

The Bronxville Public School is known as The Bronxville School. The school was started as a progressive educational institution in the 1920s.

St. Joseph School opened on September 10, 1951 adjacent to the church at 30 Meadow Avenue and was staffed by the Congregation of the Most Holy Rosary (Adrian Dominican Sisters), while operated by the parish. Francis Cardinal Spellman dedicated the school on October 7 of that year. Msgr. Patrick Sheridan oversaw the start of construction in 1985 of the parish center, which included a gymnasium and additional space for teaching and offices, with the dedication by John Cardinal O'Connor occurring on September 27, 1986. St. Joseph School consists of an upper and lower school of grades kindergarten through eight. It was presented with a National Blue Ribbon Award by the U.S. Department of Education in 2010. The school's facilities are used also for the CCD religious education program for students who attend secular schools. St. Joseph School has an active Mothers' Club and Men's Club. Many students who graduate go on to attend local Catholic high schools in Westchester County and Manhattan. As of 2015, 239 students attended the school.

The Village of Bronxville has more than 70 acres (280,000 m2) of parkland including athletic fields, woodlands, and a very small part of the Bronx River Parkway Reservation. The Reservation, Westchester’s oldest park, was created as an adjunct to the Bronx River Parkway that opened in 1925, and was the first linear park in the United States. The Reservation features ponds, wooden footbridges and hundreds of varieties of native trees and shrubs. The park is owned by Westchester County, and it is a favorite place for bicycling, walking, running, and nature study. It is sometimes referred to by locals as "The Duck Pond."

The Bronxville School's athletic fields contain a football field, three smaller fields used for various sports like field hockey and lacrosse, and a running track (which is only 380 meters in Lane 1 because of space issues). Bacon Woodlands, located on Kensington Road, is a natural rock outcropping which has been left in its natural state, the flatter portion of which is used as an informal play area by children. Scout Field, a Westchester County Park which is located predominantly in Yonkers and Mount Vernon but is controlled by Bronxville, is heavily utilized by the Bronxville schools' soccer, football, baseball and cross-country running programs.[23] In 2006, Chambers Field was replaced with turf, which was funded by the community and parents of athletes in Bronxville.

From April to June and September to October, a 7-mile (11 km) stretch of the Bronx River Parkway (no part of the roadway of which is in Bronxville) from Scarsdale Road in Yonkers (north of Bronxville) to White Plains closes to automobile traffic each Sunday (except on holiday weekends) between 10 a.m. and 2 p.m. During those times, the Westchester County Parks Department runs "Bicycle Sundays" along this stretch of the parkway.[24]

Historical plaque in Sunset Hill, Bronxville, NY, regarding Gramatan and the sale of Eastchester "to the White Man"