The first written mention of Bryansk was in 1146, in the Hypatian Codex, as Debryansk (appears variously as Дъбряньск, Дьбряньск, and in other spellings).[4] Its name is derived from "дъбръ", a Slavic word for "ditch", "lowland" or "dense woodland"[5][6]; the area was known for its dense woods, брянские леса, of which very little remains today. Local authorities and archaeologists, however, believe that the town had existed as early as 985 as a fortified settlement on the right bank of the Desna River. 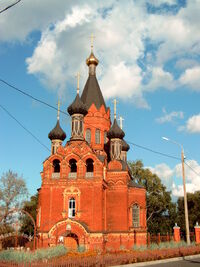 Bryansk remained poorly attested until the Mongol invasion of Russia. It was the northernmost of the Severian cities in the possession of the Chernigov Rurikids. After Mikhail of Chernigov was murdered by the Mongols and his capital was destroyed, his son moved his seat to Bryansk. In 1310, when the Mongols sacked the town again, it belonged to the principality of Smolensk.

Algirdas of Lithuania acquired Bryansk through inheritance in 1356 and gave it to his son, Dmitry the Elder. Until the end of the century, the town was contested between Władysław II Jagiełło, Vytautas, Švitrigaila, and Yuri of Smolensk.

Great Duchy of Moscow conquered Bryansk following the Battle of Vedrosha in 1503. The town was turned into a fortress which played a major role during the Time of Troubles. Peter the Great incorporated Bryansk into the Kiev governorate, but Catherine the Great deemed it wise to transfer the town to the Oryol guberniya in 1779. She also promulgated the town's coat of arms.

In the 17th and 18th centuries, the economy of Bryansk, which had become a regional trading center, was based on the Svenskaya fair, the largest in Western Russia. The fair was held annually under the auspices of the Svensky Monastery. After cannon and ammunition started to be manufactured there for the Imperial Russian Navy in 1783, Bryansk evolved from a regional market town into an important industrial center for metallurgy and textiles. The city's population exceeded 30,000 by 1917.

In 1918 the Belarusian People's Republic claimed Bryansk, but the town was taken by Bolshevik forces in 1919. During the World War II, Bryansk was occupied by the Germans (from October 6, 1941 to September 17, 1943) and the city was heavily damaged by fighting. About 60,000 Soviet partisans were active in and around Bryansk, inflicting heavy losses on the German army. Soon after its liberation, Bryansk became the administrative center of Bryansk Oblast (1944).

Today Bryansk is an important center for steel and machinery manufacturing, and is home to many large factories. Railway wagons and locomotives are important products. Bryansk also has two universities, three theatres and a technical academy. The city and the region was mildly affected by the Chernobyl accident. The city has a developed Trolley bus network and is a hub of several road and rail connections.

According to the city's official page, Bryansk is twinned with:

Template:Cities and towns in Bryansk Oblast