The territory of what is now Bryansk Oblast has been inhabited since ancient times by Slavic tribes. In the 9th to 11th centuries they lived along the banks of the Desna and in the forests of the land between the Desna and the Oka River. The city of Bryansk was established in 985.[2]

Great Duchy of Moscow conquered Bryansk following the Battle of Vedrosha in 1503. The town was turned into a fortress which played a major role during the Time of Troubles. In 1618 the Deulino Armistice saw the southern and western area of the Bryansk region temporarily ceded to Poland. Peter the Great incorporated Bryansk into Kiev Governorate, but Catherine the Great deemed it wise to transfer the town to the Oryol Governorate in 1779. She also promulgated the town's coat of arms. Bryansk became the duchy's south-western outpost in the fight against Lithuania, Poland and Crimean Khanate.

After the expulsion of the Poles and reunification with Russia in 1654, all the left bank of the Dnieper (Malorossiya), including the south-western area of Bryansk, was divided into hundreds of administrative regiments. One of the largest was Starodubaka. In 1781, these regiments merged into districts and several territories.

The 17th and 18th centuries were a period of significant regional economic development. The industrial revolution began in the 18th century, particularly in the eastern part of Bryansk and due to its reserves of sand and saw the growth of the glass industry.

On April 1, 1920, Bryansk Oblast was established but on October 1, 1929 it was incorporated into the Western Oblast. On September 27, 1937 the Central Executive Committee decided to abolish the Western Krai, dividing it into Smolensk and Oryol Oblasts. The current territory of Bryansk Oblast became a part of Oryol Oblast.

In August-October 1941 the region was occupied by Nazi troops. From the first days of occupation, the struggle against the invaders took the character of a popular movement. In the Bryansk there were about 60,000 guerrillas from the guerrilla compounds of SA Kovpak, AF Fedorov and AN Saburov. It resulted in the destruction and burning of many towns and villages, affecting some 111,000 homes and many important industrial enterprises. After the liberation of territory (August-September 1943), extensive restoration work commenced.

The modern Bryansk Oblast was established by the Decree Presidium of the Supreme Soviet of the USSR on July 5, 1944.

Bryansk Oblast lies in western Russia in the western part of the East European Plain, occupying the middle part of the Desna River basin. The area, covering 34,900 km² is bounded to the north with Smolensk Oblast, with Kaluga Oblast and Orel Oblast in the south and southeast and borders Kursk, Chernihiv and Sumy with the Ukraine to the southwest and Gomel and Mogilev in Belarus to the northwest.

The climate is temperate continental. The average temperature in January is -7 - 9 °C. The average July temperature is between 18 and 20 °C. About a quarter of the total area is covered by forests, mainly coniferous, mixed and deciduous, as well as forest-steppe.

Natural resources include deposits of sand, clay, chalk, marl, and other building materials, as well as phosphorite.

As a result of the Chernobyl disaster on April 26, 1986, part of the territory of Bryansk region has been contaminated with radionuclides (mainly the Klimovsky, Klintsy, Krasnogorsk, Surazh and Novozybkov areas). In 1999, some 226,000 people lived in areas with the contamination level above 5 Curie/km2, representing approximately 16% of the Oblast's population.

Agriculture. Fertile soils and a long growing period favor the development of agriculture in Bryansk Region, which is one of the leading agricultural regions of the Russian Federation.

Livestock breeding is Bryansk Oblast's leading agricultural sector. It provides most of the agricultural commodities; and provision of food products, the profitability of businesses, and living standards of rural residents depend on the efficient operation of this branch of the economy. Livestock breeding for meat and dairy products, poultry farming, horse breeding, fur farming, and beekeeping are all developed in the region.[4]

Grain is cultivated on more than half the sown area, mainly in southern and central districts with more favorable climatic conditions.

Potatoes are the second most important crop after grain. After Peter the Great brought them to Russia in the early 18th century, they became the country's "second bread". Potatoes are unique in that they are simultaneously an industrial, feed, and food crop. Russia's largest potato granulating mill outfitted with modern equipment is located in Bryansk Oblast.[5]

Other vegetables besides potatoes are also grown, and certain districts are noted for hothouse farming. Potatoes and vegetables are the most profitable of all agricultural products.

The Flag of Bryansk Oblast represents a panel burgundy with a ratio of 1:1,5. In the center of the cloth is placed coat of arms of the Bryansk region. The coat of arms is a blue shield representing Slavic unity between the states of Russia, Belarus and Ukraine. In the upper part of the shield is a stylized golden spruce with a three-tiered crown representing the forests of Bryansk. The flag is burgundy in color, representing the color of the banners under which the army and guerrillas fought for the liberation of Bryansk.

Bryansk Oblast is divided into 27 districts (raions) and 4 cities. Together they comprise 12 towns, 24 urban-type settlements, and 224 selsoviets. 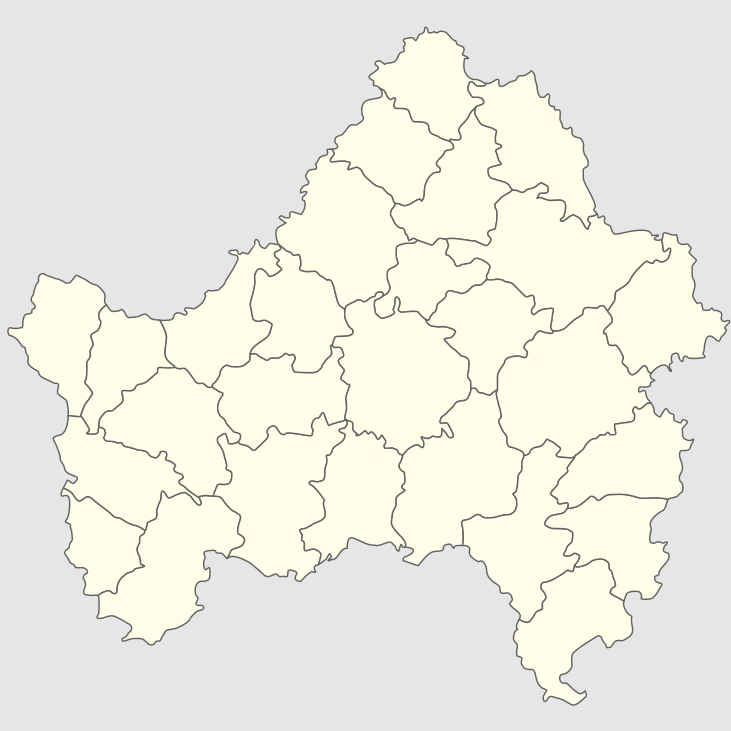 Bryansk was one of the cultural centers of Rus in the Middle Ages. Painters, architects, carvers, jewelers, smiths, and embroideresses all worked in Bryansk. In each century, they beautified the churches, houses, and streets in their own way. Few of their names are known, but their works are. Bryansk itself is connected with the golden age of Russian national culture.[7]

There are seventeen museums in Bryansk Oblast.[2] The main cities have many major architectural and archeological monuments. In Bryansk is the Svenski monastery, Chashin mound (the birthplace of Bryansk), the ancient Kremlin of Bryansk on Pokrovskaya Mountain, Peter and Paul monastery etc.[2] Main churches include the Voksresenskaya, Vvedenskaya and Spaso-Grobovskaya, Pokrovskaya and Gorne-Nikolskaya.

Klintsy is the second largest city of Bryansk oblast and was one of the Old Believers’ centers, now known for its textile industry and its ancient temples. Trubchevsk is noted for its archeological and architectural monuments, in particular the Trinity Cathedral of the 13th-19th centuries with its tomb.[2] The museum contains some valuable items dated to the 6th-7th centuries.[2]

A large railway junction is located in the capital of Bryansk. Most rail lines in the oblast are electrified, using AC power. In connection with the border situation, Bryansk there are several major customs terminals.

The oblast is crossed by the M3 Moscow—Kiev highway and the M13 Bryansk-Novozybkov-Boundary Belarus—(Kobrin), and fourteen kilometers from the administrative center of the oblast is Bryansk International Airport.