Burleigh County is a county in the U.S. state of North Dakota. As of the 2020 United States Census, the population was 98,458,[1] making it the second-most populous county in North Dakota. Its county seat is Bismarck,[2] the state capital. The county was named for Dakota Territory political figure Walter A. Burleigh.

The Missouri River flows south-southeasterly along the lower west boundary line of Burleigh County. The central part of the county is drained by south-flowing creeks. The county terrain consists of semi-arid low rolling hills, partially devoted to agriculture.[5] The terrain slopes to the south, and its western portion also slopes to the river valley. The terrain's highest point is on the upper portion of the east boundary line, at 2,060' (628m) ASL.[6] The county has a total area of 1,668 square miles (4,320 km2), of which 1,633 square miles (4,230 km2) is land and 36 square miles (93 km2) (2.1%) is water.[7] 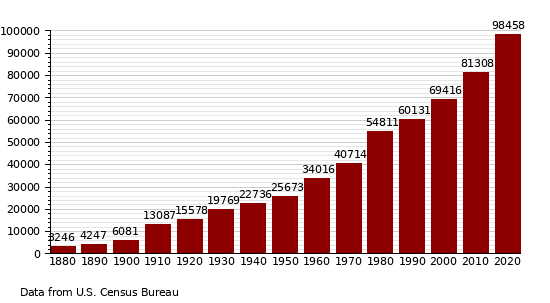 Burleigh County voters have voted Republican for several decades. With the exception of 1964, no Democratic Party candidate has received even 40 percent of the county's vote after 1940.