Familypedia
Register
Don't have an account?
Sign In
Advertisement
in: Pages with broken file links, Counties of Norway, Buskerud

Buskerud extends from Hurum at the Oslofjord to the Halling mountains and Hardanger. The county is conventionally divided into traditional districts. These are Eiker, Ringerike, Numedal and Hallingdal. Hønefoss is the district capital of Ringerike. Its western part is a mountainous plateau with forested valleys and high, grassy pastures; its eastern part contains a lowland basin with many lakes and streams. Tyrifjorden and Krøderen are the biggest lakes. Numedalslågen, the third longest river in Norway, starting in Hordaland, runs through Buskerud unto Vestfold where it reaches the sea, while river Begna sweeps into lake Sperillen.

Buskerud was separated from Akershus as an amt of its own in 1685, but the area of this one it was smaller than today. (It then consisted of the present municipalities of Flå, Gol, Hemsedal, Hol, Hole, Krødsherad, Modum, Nedre Eiker, Nes, Ringerike, Sigdal, Øvre Eiker and Ål.) The area of the present municipalities of Flesberg, Hurum, Kongsberg, Lier, Nore og Uvdal, Rollag and Røyken were transferred from Akershus amt to Buskerud amt in 1760. The name Buskeruds amt was changed to Buskerud fylke in 1919. The municipality of Skoger was transferred from Vestfold to Buskerud in 1964.

The area Ringerike may once have been a small kingdom. During the 10th century, Norway's kings Olav Trygvason and Olav Haraldsson grew up at Bønsnes in Ringerike. In the Numedal valley, silver has been mined in Kongsberg from the 17th century but was discontinued in 1957. Weapons industry had been developed in Kongsberg from 1814, and various high tech industry companies now represent the town's major employers. At Modum there once was a Cobalt pigment production works (Blaafarveværket, "The Blue-Color Works").

The county is named after the old farm Buskerud (Norse Biskupsruð) in Modum, since this was the seat of the bailiffs in old time (until 1668). The first element is the genitive case of biskup m 'bishop', the last element is ruð n 'clearing, farm'. (The farm originally belonged to the bishop of Oslo.) 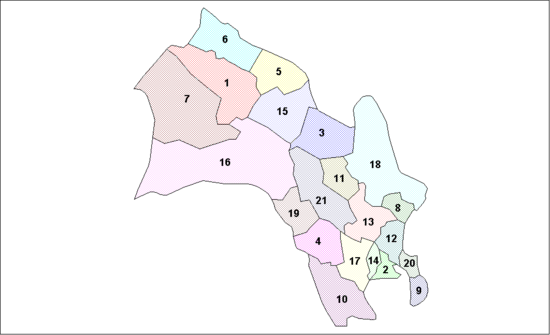 Buskerud County has a total of 21 municipalities: