Familypedia
Register
Don't have an account?
Sign In
Advertisement
in: Anderson (surname), Born in 1905, Died in 1991,
and 14 more

Carl D. Anderson achieved global fame for his 1932 experiment confirming Paul Dirac's prediction of antimatter when he constructed equipment that he successfully used to demonstrate existence of a positron.

Anderson was born in New York City, the son of Swedish immigrants. His mother was Emma Adolfina Ajax (1878), and his father was Carl David Anderson (1878-aft1905), who had been in the United states since 1896. When Carl was seven years old, the family left New York for Los Angeles, where Carl attended public schools. He studied physics and engineering at CalTech (B.S., 1927; Ph.D., 1930). Under the supervision of Robert A. Millikan, he began investigations into cosmic rays during the course of which he encountered unexpected particle tracks in his cloud chamber photographs that he correctly interpreted as having been created by a particle with the same mass as the electron, but with opposite electrical charge. This discovery, announced in 1932 and later confirmed by others, validated Paul Dirac's theoretical prediction of the existence of the positron. Anderson obtained the first direct proof that positrons existed by shooting gamma rays produced by the natural radioactive nuclide ThC'' (208Tl)[1] into other materials, resulting in creation of positron-electron pairs. For this work, Anderson shared the Nobel Prize in Physics for 1936 with Victor Hess.[2]

Also in 1936, Anderson and his first graduate student, Seth Neddermeyer, discovered the muon (or 'mu-meson', as it was known for many years), a subatomic particle 207 times more massive than the electron. Anderson and Neddermeyer at first believed that they had seen the pion, a particle which Hideki Yukawa had postulated in his theory of the strong interaction. When it became clear that what Anderson had seen was not the pion, the theoretical physicist I. I. Rabi, puzzled as to how the unexpected discovery could fit into any logical scheme of particle physics, quizzically asked "Who ordered that?" (sometimes the story goes that he was dining with colleagues at a Chinese restaurant at the time). The muon was the first of a long list of subatomic particles whose discovery initially baffled theoreticians who could not make the confusing "zoo" fit into some tidy conceptual scheme. Willis Lamb, in his 1955 Nobel Prize Lecture, joked that he had heard it said that "the finder of a new elementary particle used to be rewarded by a Nobel Prize, but such a discovery now ought to be punished by a 10,000 dollar fine." [3]

Anderson spent all of his academic & research career at CalTech. During World War II, he conducted research in rocketry there. He died on January 11, 1991, and his remains were interred in the Forest Lawn, Hollywood Hills Cemetery in Los Angeles, California. 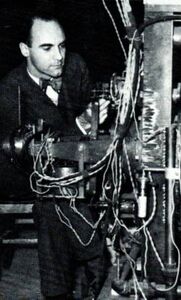 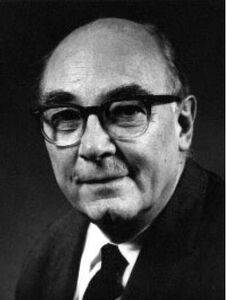 Besides the Nobel, Carl was awarded the Gold Medal of the American Institute of the City of New York (1935), the Elliott Cresson Medal of the Franklin Institute (1937), the Presidential Certificate of Merit (1945), and the John Ericsson Medal of the American Society of Swedish Engineers (1960). He received honorary degrees from Colgate University (1937), Temple University (1949), and Gustavus Adolphus College of St. Peter, Minn. (1963). Elected to the National Academy of Sciences in 1938, Carl was chairman of the Physics Section from 1963 to 1966.