Familypedia
Register
Don't have an account?
Sign In
Advertisement
in: Pages with broken file links, Carmel, Indiana, Cities in Indiana,
and 2 more

Carmel /ˈkɑrməl/ is a city in Hamilton County, Indiana, United States located immediately north of Indianapolis, Indiana. The population was 79,191 at the 2010 census,[6] and it is consistently ranked, alongside Zionsville and Fishers, as one of the most affluent suburbs in the Indianapolis area.[7] In 2012, Carmel was selected as the Best Place to Live in America by CNN Money Magazine.[8]

Until 1874, the settlement where present day Carmel now sits was called Bethlehem. Today, the plot first established in Bethlehem, located at the intersection of Rangeline Road and Main Street, is marked by a clock tower, donated by the local Rotary Club in 2002.

In 1924, one of the first automatic traffic signals in the United States was installed at the intersection of Main Street and Range Line Road. The signal that was installed was the invention of Leslie Haines and is currently in the old train station on the Monon.[9]

North-South streets are not numbered, and include (West to East) Michigan, Shelborne, Towne, Ditch, Spring Mill, Meridian, Guilford, Range Line, Keystone, Carey, Gray, Hazel Dell, and River. Some of these roads are continuations of corresponding streets within Indianapolis. Towne Road replaces the name Township Line Road at 96th Street, while Westfield Boulevard becomes Range Line north of 116th Street. Meridian Street (US 31) and Keystone Parkway (formerly SR 431) are the major thoroughfares, extending from (within Carmel) I–465 in the south and merging just south of 146th Street. 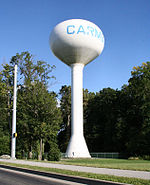 There were 28,997 households of which 41.7% had children under the age of 18 living with them, 66.6% were married couples living together, 6.3% had a female householder with no husband present, 2.4% had a male householder with no wife present, and 24.6% were non-families. 20.8% of all households were made up of individuals and 6.7% had someone living alone who was 65 years of age or older. The average household size was 2.71 and the average family size was 3.18.

Carmel has become the unofficial roundabout capital of the United States, due to the installation of over eighty roundabouts and demolishing 78 sets of traffic signals. Mayor James Brainard has said, "We have more than any other city in the US. It's a trend now in the United States. There are more and more roundabouts being built every day because of the expense saved and more importantly the safety." Many of the roundabouts are also well landscaped, thus improving the image of the highway network. More importantly, however, the decor and landscaping within the roundabouts are essential to making the roundabouts safe. By obstructing the view across the roundabout, the driver is then encouraged to look at oncoming traffic to safely determine when to enter the roundabout. Without the obstruction, drivers can be easily distracted by looking across the roundabout at their desired exit instead of at oncoming traffic. Carmel has been described as the Milton Keynes of the USA.[11]

The school system has 11 elementary schools, three middle schools and one high school. Student enrollment for the district is above 14,500.[13]

Carmel High School is the high school that the three middle schools feed into.[14]

The Meridian Corridor is serves as a large concentration of corporate office space within the City. It is home to more than 40 corporate headquarters and many more regional offices. Several large companies reside in Carmel, and it serves as the national headquarters for CNO Financial Group (formerly Conseco), MISO, Delta Faucet, Pearson Education (formerly MacMillan Publishing), as well as the headquarters of ITT Technical Institute.[15] It is also home to many mid-sized and smaller companies like Seven Corners Inc, and The Rough Notes Company.

The city of Carmel has been recognized with numerous awards and ratings for its programs and services.

Founded in 1998, the Carmel Farmers Market is one of the largest in the State of Indiana with over sixty vendors of Indiana-grown and/or produced edible products. The Market, which is managed by an all-volunteer committee, is held each Saturday morning from mid-May through the first weekend of October. Held on Center Green at the Palladium, the Market had over 60,000 visitors in 2012.

A $24.5 million water park and mega-fitness center is the center piece of Carmel's $55 million Central Park which opened in 2007 . The Outdoor Water Park consists of two water slides, a drop slide, a diving board, a lazy river, a kiddie pool, a large zero depth activity pool, Flowrider and a lap pool. The state-of-the-art fitness center consists of an indoor lap pool, a recreation pool with its own set of water slides and a snack bar, gymnasium, 1/8 mile indoor running track, and the Kids Zone childcare. The Center also has an adjoining building connected by an elevated walkway over the Monon Trail, where the Carmel Clay Parks Department offices are located. In addition to a banquet center and activity rooms that can be rented out.

The Monon Trail is a bicycle trail that is part of the Rails-to-Trails movement. It runs from 10th near downtown Indianapolis through Broad Ripple and then crosses into Carmel at 96th Street and continues north through 146th Street into Westfield. In the future, it is planned to run all the way to Sheridan. In January 2006 speed limit signs of 15 to 20 mph have been added to sections of the trail north of 96th Street which is the county line with Marion County (Indianapolis.)

Designed to promote small businesses and local artisans, Carmel's burgeoning Arts and Design District and City Center have become one of central Indiana's most luring attractions for residents and visitors. Centered at the intersection of Main Street and Range Line Road in Old Town Carmel and flanked by Carmel High School on the east and the Monon Greenway on the west, the Carmel Arts and Design District includes the award winning Carmel Clay Public Library,[18] the Hamilton County Convention & Vistitor's Bureau and Welcome Center and a prodigious collection of art galleries, boutiques, interior designers, cafes and restaurants. Lifelike sculptures by John Seward Johnson II, "The Normal Rockwell of American Sculpture", ornament the streets of the District.

The community can reflect and enjoy the landscaping in this restful setting, easily accessible from the Monon Trail. Ground was broken for the Japanese Garden south of City Hall in 2007. The garden was dedicated in 2009 as the 15th anniversary of Carmel's Sister City relationship with Kawachinagano, Japan was celebrated.[20] An Azumaya style tea gazebo was constructed in 2011 and dedicated on May 2.[21]