Familypedia
Register
Don't have an account?
Sign In
Advertisement
in: Andrew Carnegie, Settlements established in 1894, Pittsburgh metropolitan area,
and 2 more

Carnegie ( /ˈkɑrnɪɡi/)[1] is a borough in Allegheny County, Pennsylvania, United States, and is part of the Pittsburgh Metro Area. The population was 7,972 in the 2010 census.

It is part of the 18th Congressional District.

Carnegie is named after Andrew Carnegie, who donated one of his libraries for the gesture.[3] It was incorporated on March 1, 1894.[4] from the boroughs of Chartiers and Mansfield (separated by Chartiers Creek). Later, the borough annexed part of Robinson Township (now Rosslyn Heights). Neighborhoods include Rosslyn Heights, Cubbage Hill, Irishtown, Forsythe Hill, Library Hill, and Old Mansfield.

Many neighborhoods were at one time or another mined for coal. The main employers were steel mills such as Superior Steel & Union Electric Steel. Carnegie had a rail yard that had connections to several railroads early in the twentieth century, including the Wabash Pittsburgh Terminal railroad, and the Pennsylvania Railroad. In the 1970s, Carnegie suffered economically with the closure of the great steel mills such as J & L in and around Pittsburgh.

In 1923, Imperial Wizard Hiram Evans and ten thousand Ku Klux Klan members tried to march through the streets of Carnegie. The town's large Catholic population refused to let the Klan march through the streets. Violence broke out, one Klansman was killed and hundreds of others wounded. Protestant membership in the KKK of the 1920s grew as the population of Catholic families in town increased. By 1923, Carnegie had one of the largest Klans in the state.[5]

In 2004, Carnegie was significantly damaged by flooding as a result of Hurricane Ivan. Much of the commercial section of the borough, as well as the borough's Roman Catholic churches, were closed or damaged. But in about 2014, with the economic upturn, Carnegie's Main Street rebounded, with many new restaurants and small businesses, becoming a popular Pittsburgh-area destination, especially on weekends.[6]

Carnegie is a walkable community with many interesting and unique stores and restaurants on its Main Street. Its park is home to a dog park, playground, tennis courts, a hockey rink, basketball courts, baseball fields, walking trails, and Pitcher Skate Park. The Carnegie Library and Music Hall is home to the Grand Army of the Republic Cpt. Thomas Espy Post and Stage 62 theater productions. Off the Wall Productions theater also makes its home in Carnegie, and hosts the annual Pittsburgh New Works Festival.

Carnegie is religiously diverse. There are two Orthodox Churches (Ukrainian and Russian), two Lutheran churches, a Ukrainian Catholic church, a Methodist church, an Episcopal church, a Polish Catholic church, a Roman Catholic Church, and a synagogue. In addition, the Attawheed Islamic Center opened in 2011, and the Indian Community Center in 2012.

Carnegie's students are served by the Carlynton School District. There is an elementary school within the Borough. 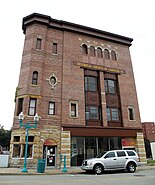 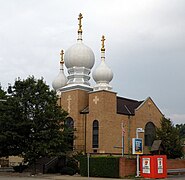