Cass County lies on the east side of North Dakota. Its east boundary line abuts the west boundary line of the state of Minnesota across the river. The Red River flows northward along the county's east boundary, on its way to Lake Winnipeg and Hudson Bay. The county's terrain consists of low rolling hills, devoted to agriculture except around developed areas.[8] Its terrain slopes to the north and east, with its highest point on the southwestern corner at 1,194' (364m) ASL.[9] The county has a total area of 1,768 square miles (4,580 km2), of which 1,765 square miles (4,570 km2) is land and 3.0 square miles (7.8 km2) (0.2%) is water.[10]

Cass County has the following lakes:[8] 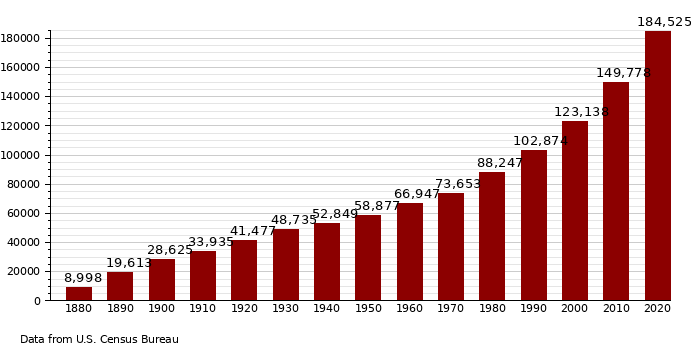 The current Sheriff is Jesse F. Jahner. Jahner has served as Sheriff of Cass County since January 2, 2019.

The voters of Cass County have historically tended to vote Republican. As recently as the 2004 presidential election, George W. Bush carried Cass County with nearly 60 percent of the vote. However, in recent elections, the county has become more politically diverse and competitive, particularly in Fargo. Since 2008, no Republican presidential candidate has received over 50% of the vote in Cass County. In 2008, Democratic candidate Barack Obama won the majority of votes in Cass County, with a voting percentage very close to the percentage Obama received in the entire nation, while John McCain won the majority of votes in North Dakota. Mitt Romney's winning margin in 2012 over Obama in Cass County was 49.9% to 47%, while Donald Trump received 49.3% of votes in 2016, compared to 38.8% for Hillary Clinton and 11.9% for third-party candidates. In 2018, Democratic Senator Heidi Heitkamp achieved a 14-point lead in Eastern North Dakota, although the state as a whole soundly elected Republican Kevin Cramer.