Familypedia
Register
Don't have an account?
Sign In
Advertisement
in: Carolingian (surname), Born in 747, Died in 814,
and 17 more

Desiderata of the Lombards (c744-)

Charlemagne (Latin: Carolus Magnus, meaning Charles the Great) was King of the Franks from 768 and Emperor of the Romans (Imperator Romanorum) from 800 to his death. He expanded the Frankish kingdom into a Frankish Empire that incorporated much of Western and Central Europe. During his reign, he conquered Italy and was crowned Imperator Augustus by Pope Leo III on 25 December 800 which temporarily made him a rival of the Byzantine Emperor in Constantinople.

His rule is also associated with the Carolingian Renaissance, a revival of art, religion, and culture through the medium of the Catholic Church. Through his foreign conquests and internal reforms, Charlemagne helped define both Western Europe and the Middle Ages. He is numbered as Charles I in the regnal lists of France, Germany (where he is known as Karl der Große), and the Holy Roman Empire.

Charlemagne was the eldest child of Pepin the Short (714 – 24 September 768, reigned from 751) and his wife Bertrada of Laon (720 – 12 July 783), daughter of Caribert of Laon and Bertrada of Cologne. Many historians consider Charlemagne (Charles) to have been illegitimate, although some state that this is arguable,[1] because Pepin did not marry Bertrada until 744, which was after Charles' birth; this status did not exclude him from the succession.[2][3][4]

It appears that Charles was born illegitimately in either 742 or 747 a.d., just a couple of years before the marriage of his parents, in or near the ancient German city of Aachen. When his father, King Pepin, died in 768, Charles and his younger brother Carloman became joint rulers (sharing a kingship) over the Franks, continuing a tradition that began with their ancestor, Charles Martel (686-741). The latter got on badly with Charlemagne, but war was prevented by the sudden death of Carloman in 771.[5]

The first major crisis of his reign is when the duchies of Aquitaine and Gascony (located in the southern part of the France) attempted a revolt from the Frankish Kingdom in April 769, led by Hunald II, Duke of Aquitaine. Charlemagne's effectiveness in putting it down significantly helped to strengthen his power base and reputation. Charles went to war, leading an army to Bordeaux, where he set up a fort at Fronsac. Hunald was forced to flee to the court of Duke Lupus II of Gascony. Lupus, fearing Charles, turned Hunald over in exchange for peace, and was put in a monastery. Gascon lords also surrendered, and Aquitaine and Gascony were finally and fully subdued by the Franks. [6]

Charles interests then turned to the Northern Italy, seat of both the Catholic pope and also the Kingdom of Lombardy. These two entities hotly strived with each other for political power in the region. The brothers, Charles and Carloman, still ruling as co-regents, maintained lukewarm relations with the assistance of their mother Bertrada, but in 770 Charles signed a treaty with Duke Tassilo III of Bavaria and married a Lombard Princess (commonly known today as Desiderata, the daughter of King Desiderius, to surround Carloman with his own allies. Though Pope Stephen III first opposed the marriage with the Lombard princess, he found little to fear from a Frankish-Lombard alliance.

Less than a year after his marriage, Charlemagne repudiated Desiderata and married a 13-year-old Swabian named Hildegard. The repudiated Desiderata returned to her father's court at Pavia. Her father's wrath was now aroused, and he would have gladly allied with Carloman to defeat Charles. Before any open hostilities could be declared, however, Carloman died on 5 December 771, apparently of natural causes. Carloman's widow Gerberga of Pavia (c750-) fled to Desiderius' court in Lombardy with her sons for protection.

At his succession in 772, Pope Adrian I demanded the return of certain cities from the Italians. Charlemagne sided with the papal authority and helped to sieze several cities from the Lombard kingdom. Charlemagne and his uncle Bernard crossed the Alps in 773 and chased the Lombards back to Pavia, which they then laid siege to the city for a year before the Lombard princes submitted to his rule. [7]

Charles, unusually, had himself crowned with the Iron Crown and made the magnates of Lombardy pay homage to him at Pavia. Charlemagne was then master of Italy as king of the Lombards. He left behind a garrison led by a few Frankish counts in Pavia to subjugate the peninsula.

Charlemagne was promised several Iberian cities in return for giving military aid to the governor Moorish governor of Spain, however, the deal was withdrawn. Subsequently, Charlemagne's retreating army experienced its worst defeat at the hands of the Basques, at the Battle of Roncesvalles (778) memorialised, although heavily fictionalised, in the Song of Roland.

Setting a power base in the Toulouse (Southern France), Charlemagne asserted Frankish authority southward over the Pyrenees by subduing the south-western marches of Toulouse (790) and establishing vassal counties on the southern Pyrenees that were to make up the Spanish March. As of 794, a Frankish vassal, the Basque lord Belasko (al-Galashki, 'the Gaul') ruled Álava, but Pamplona remained under Cordovan and local control up to 806.

Charlemagne saw opportunities to restore the southwest corner to Christian rule. In Hispania, the struggle against the Moors continued unabated throughout the latter half of his reign. Louis was in charge of the Spanish border. In 785, his men captured Girona permanently and extended Frankish control into the Catalan littoral for the duration of Charlemagne's reign (the area remained nominally Frankish until the Treaty of Corbeil in 1258). The Muslim chiefs in the northeast of Islamic Spain were constantly rebelling against Cordovan authority, and they often turned to the Franks for help. The Frankish border was slowly extended until 795, when Girona, Cardona, Ausona and Urgell were united into the new Spanish March, within the old duchy of Septimania.

In the Mediterranean Sea, the Franks fought against the Saracen pirates and conquered Corsica, Sardinia and the Balearic Islands. The islands were often attacked by Saracen pirates, but the counts of Genoa and Tuscany (Boniface) controlled them with large fleets until the end of Charlemagne's reign.

Charlemagne even had contact with the caliphal court in Baghdad. In 797 (or possibly 801), the caliph of Baghdad, Harun al-Rashid, presented Charlemagne with an Asian elephant named Abul-Abbas and a clock. [8]

Charlemagne was engaged in almost constant warfare on the Eastern Front throughout his reign, often at the head of his elite scara bodyguard squadrons. There were numerous battles against the Saxons, Bavarians and Avars. By forcibly converting them to Christianity, he integrated them into his realm and thus paved the way for the later dynasties.

In the Saxon Wars, spanning thirty years and eighteen battles, he conquered Saxonia and proceeded to convert it to Christianity, himself leading many mass baptisms. Following his subjugation of the Dukes of Friuli and Spoleto, Charlemagne returned rapidly to Saxony in 776, where a rebellion had destroyed his fortress at Eresburg. The Saxons were once again defeated, but their main leader, Widukind, escaped to Denmark, his wife's home. Charlemagne built a new camp at Karlstadt. In 777, he called a national diet at Paderborn to integrate Saxony fully into the Frankish kingdom. Many Saxons were baptised as Christians.

In 789, Charlemagne turned to Bavaria. He claimed that Tassilo III, Duke of Bavaria was an unfit ruler, due to his oath-breaking. The charges were exaggerated, but Tassilo was deposed anyway and put in the monastery of Jumièges. In 794, Tassilo was made to renounce any claim to Bavaria for himself and his family (the Agilolfings) at the synod of Frankfurt; he formally handed over to the king all of the rights he had held. Bavaria was subdivided into Frankish counties, as had been done with Saxony. [9]

In 788, the Avars, an Asian nomadic group that had settled down in what is today Hungary (Einhard called them Huns), invaded Friuli and Bavaria. Charlemagne was preoccupied with other matters until 790 when he marched down the Danube and ravaged Avar territory to the Győr. A Lombard army under Pippin then marched into the Drava valley and ravaged Pannonia. The campaigns ended when the Saxons revolted again in 792.

For the next two years, Charlemagne was occupied, along with the Slavs, against the Saxons. Pippin and Duke Eric of Friuli continued, however, to assault the Avars' ring-shaped strongholds. The great Ring of the Avars, their capital fortress, was taken twice. The booty was sent to Charlemagne at his capital, Aachen, and redistributed to his followers and to foreign rulers, including King Offa of Mercia. Soon the Avar tuduns had lost the will to fight and travelled to Aachen to become vassals to Charlemagne and to become Christians. Charlemagne accepted their surrender and sent one native chief, baptised Abraham, back to Avaria with the ancient title of khagan.

In 799, Pope Leo III had been bullied by the Romans, who tried to put out his eyes and tear out his tongue. Leo escaped and fled to Charlemagne at Paderborn. Charlemagne escorted the Pope back to Rome in November 800 and restored him to power. At Mass, on Christmas Day (25 December), when Charlemagne knelt at the altar to pray, the Pope crowned him Imperator Romanorum ("Emperor of the Romans") in Saint Peter's Basilica. In so doing, the Pope effectively nullified the legitimacy of Empress Irene of Constantinople.

Charlemagne's coronation as Emperor, though intended to represent the continuation of the unbroken line of Emperors from Augustus to Constantine VI, had the effect of setting up two separate (and often opposing) Empires and two separate claims to imperial authority. For centuries to come, the Emperors of both West and East would make competing claims of sovereignty over the whole. This imperial power struggle would also lead to the schism of the Church creating the Catholic Church (based in Rome) and the Orthodox Church (based in Constantinople).

Charlemagne had at least twenty children over the course of his life time with three wives and five concubines. He had five wives but no offspring with his second and his last. Follow the links for more info about each spouse and child.

Little is known about the origins of Himiltrude (c742-c780). Paulus Diaconus calls her a "noble girl". Himiltrude bore Charles a son called Pépin. Shortly after Pepin's birth, an alliance was formulated between Charlemagne and the King of the Lombards, Desiderius. To seal the alliance, it was agreed that Charlemagne should marry Desiderius' daughter (called Desiderata by modern scholars). Himiltrude was dismissed at that time and disappears from historical records.

Union #2: Desiderata of the Lombards

Union #3: Hildegard of the Vinzgau

Less than a year after his first marriage, Charlemagne repudiated Desiderata of the Lombards (c744-) and married a 13-year-old Swabian princess named Hildegard of the Vinzgau (758-783) in 771. But she died in 783, probably due to childbirth complications with her last baby. By her he had nine children:

His second known concubine was Madelgarde de Lommois (c760-) - by her he had:

Just a few months after Hildegarde's death in 783, Charlemagne married his third wife, Fastrada of Ingelheim (765-794). She was the daughter of powerful East Frankish lord and this marriage may have been to solidify alliances on the Saxon front.

Only five or six of his children had children of their own, producing about 26 grandchildren, 56 great-grandchildren, and 60 great-great-grandchildren. In that 5th generation, lines first reconnect, with Wipert de Nantes (860-) the first double descendant of Charlemagne, and the brothers Hildebert I de Limoges (865-916) and Ranulphe I d'Aubusson (872-926), who are the first double descendants of mixed generation (5 and 6). The numbers of Charlemagne's descendants per generation do not grow as fast as one might expect, partly because of intermarriage, but also because of intense rivalry (including murder). To reduce such rivalry, many descendants were clergy.

Amaltrud of Vienne (?-?) - NOTE: No documentation found anywhere in Familypedia to support this family line. 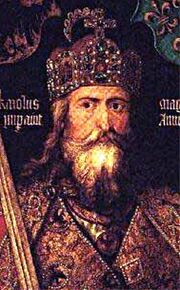