Familypedia
Register
Don't have an account?
Sign In
Advertisement
in: Churchill (surname), Born in 1656, Died in 1714,
and 17 more

General Charles Churchill (2 February 1656 – 29 December 1714) was a British Army officer who served during the War of the Spanish Succession and an English politician who sat in the English and British House of Commons from 1701 to 1710. He was a younger brother of John Churchill, 1st Duke of Marlborough and both his military and political careers were closely connected with his brother's. Along with Marlborough's Irish Chief of Staff William Cadogan, he was one of Churchill's closest advisors. He was a Tory, in contrast to his Whig brother who tolerated and possibly used Churchill's Tory connections.

Churchill was the son of Winston Churchill (1620-1688) and his wife Elizabeth Drake, daughter of Sir John Drake, 1st Baronet of Ashe, Devon. He became a page and, from 1672 to 1708, a gentlemen in the household of Prince George of Denmark. He became Lieutenant of the Tower of London in 1702.[1]

Charles Churchill joined the English Army as an ensign in the 3rd Regiment of Foot in 1674 and later received the colonelcy of that unit. He fought in numerous wars and battles, including Sedgemoor during Monmouth's Rebellion. He served under his brother when he captured Cork from its Jacobite Irish Army garrison in 1690. He then served on the continent at the Steenkerque and Landen. Churchill was promoted to brigadier-general in 1690 and to major-general in 1694.

He was the father of Lieutenant-General Charles Churchill, by his mistress Elizabeth Dodd, and the grandfather of Charles Churchill (of Chalfont) by his son's mistress, the actress Anne Oldfield. His grandson married Lady Maria Walpole, illegitimate daughter of Robert Walpole, and had issue including Mary Churchill (2nd wife of the Earl Cadogan and ancestor of later earls). [2] 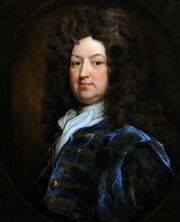