Familypedia
Register
Don't have an account?
Sign In
Advertisement
in: Non-SMW people articles, Ensko (surname), Born in 1890, Died in 1952

He was the US manager for the Hunyadi János Mineral Water Company of Budapest, Hungary.

On October 20, 1916 he applied for a passport to visit Budapest. On January 13, 1917, he was returning to the United States, first-class, aboard the twin screw Steamer "Noordam" going from Rotterdam in the Netherlands to New York.

He died in 1952 and his funeral notice appeared in the New York Times on November 24, 1952, on page 23: "Ensko - Charles Edward, Sr. at Levittown, Pennsylvania, beloved husband of Elizabeth McIlwraith Ensko, devoted father of Eloise Ensko Higgins and Charles Ensko, Jr. Services at "The Universal Chapel." Lexington Avenue at 52nd Street on Wednesday, November 26, 1952 at 11 a.m."

Memories about Charles Edward Ensko I[] 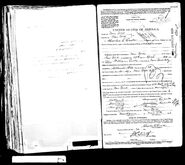 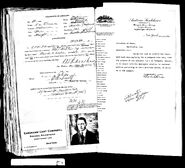