Union Army Colonel in US Civil War, President of the Union Paciifc Railroad

He was a member of the prominent Adams family, and son of Charles Francis Adams, Sr. He served as a colonel in the Union Army during the American Civil War. After the war, he was a railroad regulator and executive, an author of historical works, and a member of the Massachusetts Park Commission.

Adams was President of the Union Pacific Railroad from 1884 to 1890, having previously become widely known as an authority on the management of railways. However, he left his office due to financial problems. Among his writings are Railroads, Their Origin and Problems (1878).

From 1893 to 1895 he was Chairman of the Massachusetts Park Commission, and as such took a prominent part in planning the present park system of the state.

Charles is a direct descendant of the following: 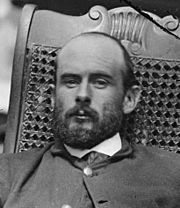