Familypedia
Register
Don't have an account?
Sign In
Advertisement
in: Thynne (surname), Born in 1811, Died in 1895,
and 7 more

Charlotte's paternal grandmother was a great-great-great-great-aunt of Elizabeth II of the United Kingdom (1926), which makes Charlotte that monarch's second cousin three times removed.

Charlotte was born at the Thynne family seat of Longleat in Wiltshire[1] as the daughter of Thomas Thynne, 2nd Marquess of Bath. On 13 March 1829 she married Walter Montagu-Douglas-Scott, 5th Duke of Buccleuch at St George's, Hanover Square, London. She served as Mistress of the Robes to Queen Victoria, a post later also filled by her daughter-in-law Louisa.

Among her children were William Montagu Douglas Scott, 6th Duke of Buccleuch and Henry Douglas-Scott-Montagu, 1st Baron Montagu of Beaulieu.

To her husband's distress, she converted to Roman Catholicism.[2] 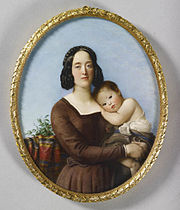