Edit with form
watch 01:36
We're Getting Mutants in the MCU - The Loop
Do you like this video?
Play Sound
Main
tree

Charlotte Pimm was born on 21 July 1887 in Walton-on-Thames, Surrey. She was christened on 10 August 1887 in St Mary's Church in Sunbury-on-Thames, Middlesex, her father's home village and where her parents had lived together for the last twenty years. Her father George Pimm, a labourer, was formerly known as George Hyatt, before taking on his mother's surname of Pimm. Her mother Betsy was a laundress from Shropshire. Charlotte was known as Lottie Pimm within her family. She grew up in the family home in Sunbury Lane, Walton-on-Thames, and when she was a girl they moved to nearby Molesey Road, Walton-on-Thames. By the age of thirteen, Lottie was working as a laundry maid at home, probably alongside her mother.

When Lottie was about fifteen she met Fred Williams, an engine driver living around the corner at Apps Court and working at the nearby Walton water works. They started courting and Lottie soon found herself pregnant.

Lottie and Fred married by H. Ramsdale Gidney, the rector of Shepperton, on 1 June 1903 in St Mary's Church in Walton-on-Thames. They selected Lottie's brother Frederick and Eliza Jane Searle as witnesses. The Searles, who also lived in Sunbury Lane, are believed to be family friends of the Pimms. Frederick later married Eliza's sister Bessie. At the time of their marriage, Lottie's address was given as 3 Dee's Cottages, Walton. Lottie moved in with Fred and they began their family in his cottage at Apps Court.

Four months after their wedding, Lottie gave birth to their first daughter Betsy Jane, who was born in their cottage. The family then moved into a new home in Oak Avenue, Walton-on-Thames, where the first son, George Charles was born. Fred and Lottie had chosen names to honour their respective parents - Betsy and George Pimm, and Jane and Charles Williams. In about 1905, the family moved to Hanworth, Middlesex, where their daughter Celia was born. By now, Lottie was a mother of three at only nineteen. They then returned to Sunbury Lane in about 1908, where they lived at 9 Aspley Cottages. Here their son Fred was born, before dying in June 1909 aged fifteen months.

Upon their return to Sunbury Lane, Fred and Charlotte were joined by Fred's father Charles, who was about seventy, and no doubt a welcome addition to assist the young parents. The return also allowed Lottie to be close to her parents, who lived at 78 Sunbury Lane. This provided a strong foundation for Lottie and Fred to raise their growing family: William was born in 1911, followed by Cathy in 1912, Freddie in 1917, and Edith in 1920.

In May 1923, Betsy Jane, at the time nineteen, unmarried and working as a domestic servant, gave birth to a daughter Phyllis. Lottie and Fred adopted Phyllis and raised her as their own daughter, hiding the illegitimacy and affording respectability in the local community. However, a few months later, in September 1923, Freddie died aged just six. He was remembered very fondly by his sister Betsy Jane, and his death is believed to have had a significant impact on the family. Two years later, the family was completed by the birth of Lottie and Fred's final and much-beloved son Ron.

As well as raising her surviving seven children, Lottie worked as a midwife in Walton-on-Thames, assisting with almost every local birth. She also attended deaths, to provide comfort and support to the dying and their families, and assist in preserving and preparing the bodies. In these roles, Lottie commanded great respect locally as a result of her caring and affectionate nature.

Lottie and Fred's home at 36 Sunbury Lane became a central hub for the family; both loved children and always had children, grandchildren, and other relatives over. Lottie was known as a brilliant cook and the family often gathered around her very large oak dining table. She particularly enjoyed baking and cake making. She also enjoyed assisting Fred tend their garden, which he was constantly developing and included vegetable and flower gardens as well as pens for the animals they kept, including pigs. 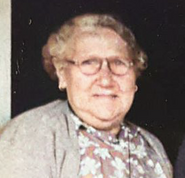 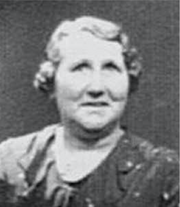