Cherry Burton is a village and civil parish in the East Riding of Yorkshire, England. It is situated approximately 3 miles (5 km) north-west of the market town of Beverley and lies to the west of the B1248 road.

The civil parish is formed by the village of Cherry Burton and the hamlets of Gardham and High Gardham. According to the 2011 UK Census, Cherry Burton parish had a population of 1,392,[1] a reduction on the 2001 UK Census figure of 1,473.[2]

The village has a Costcutter shop which also acts as a post office and a village hall which holds live musical events and hosts an annual local pantomime. The village public house, the Bay Horse, holds events each week.

Sports in the village includes cricket, football, tennis, and rounders. Clubs for cricket and football have junior sections. Just outside the village is a local golf course and caravan park.

The village is one of the few villages in the UK awarded with Fairtrade Village status for promoting fairtrade and local produce. It gained this status on 22 July 2003 and was the second village to do so.[3][4]

Cherry Burton was served by Cherry Burton railway station on the York to Beverley Line between 1865 and 1959.[5] 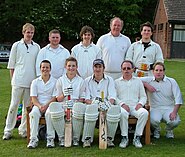 A winter day in Cherry Burton