The following is primarily based on Huston, 1912:25. Additional data is taken from Ancestry family trees, though at the moment few people seem to have been researching this individual.

Christopher is said to have been born in northern Ireland, about the year 1720. He married Susannah Wilson, probably around 1738, based on the DOB's of his children. One of his children is believed by some to have been born in Penn Township, Lancaster Co in 1740, implying that Christpher and Susannah were living in that area at the time of their marriage. By 1744 the couple had settled in Silver Springs, East Pennsboro Township, Cumberland Co, PA, where Christopher obtained a land warrant for 150 acres on the 30th of October. Survey records show that a Samuel Huston also obtained a tract of land of 200 acres (surveyed for 240 acres) in this same area (Silver Springs, East Pennsboro Township) nine years later (1752). Samuel would seem to be too old to be a child of Christopher and Susannah; if he's related to them, as seems likely, he may be a brother.

In 1784 * Christopher served as the county tax collector for East Pennsboro. He made out his will on April 26, 1773, dying sometime in December, 1784, the will being probated December 14 of that year. His wife, Susannah, is said to have reached the age of 80 at her death, but we have not found a record of her year of birth or death. Both Christopher and Susannah are said to be buried in the Pine Hill Graveyard. Christopher identifies several children in his will:

He also identifies a granddaughter Janet Smith, implying that there was another daughter who perhaps married a brother of Christopher's wife, Nancy Smith.

*This date is as given by Huston, 1912:25. This may be an error since Christopher's will is probated in December of that year.

Christopher is said to have been born in northern Ireland Huston, 1912, though the basis for this is not known. He is also believed to have come to Cumberland County from Lancaster Co, PA, and it seems not unreasonable that he might have been born there, or perhaps in "Old Chester County". If he was born as early as 1709, which some think for reasons not known, then he might indeed have immigrated as an adult, since he did not marry until c1738 based on children's DOB's. If he was born as late as c1720 he would have been 18 at marriage, and it seems possible that he would have come the New World with his parents. In any case, his parents are not known.

The following diagram shows some of the known and possible family relationships to Christopher Huston. Most of these relationships remain unproven, and some may be incorrect. 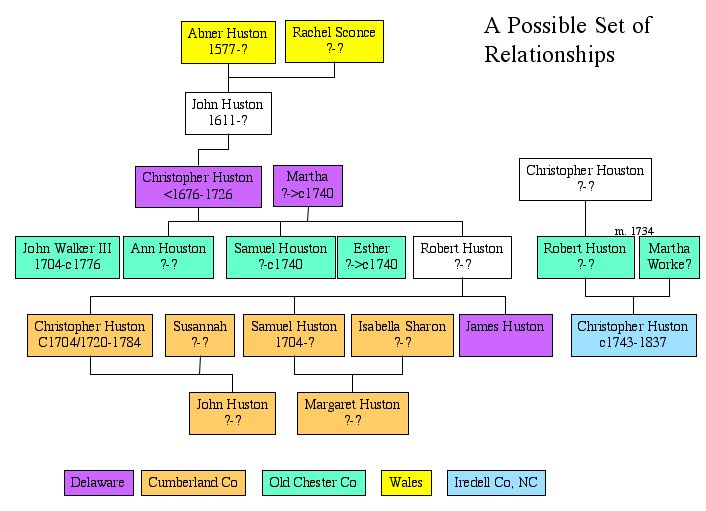