Familypedia
Register
Don't have an account?
Sign In
Advertisement
in: Keopka (surname), Born in 1892, Died in 1989, Married cousin

Edit Facts
Clara Wilhelmina Keopka was born in Westfield, Chautauqua County, New York, United States. Her family lived at several places in the village until moving to the Barber Road farm, next door to Leonard, in 1905. She graduated from Cornell University in 1914 with a B.A. degree in English; she began college in nature study. From 1914-1916 she taught nature study and elementary science at Gary, Indiana. From 1916-1917 she taught German, English, and English history at Westfield High School. From 1920 to 1922, she taught in the country school near her farm. In the early 1920's, she was a pioneer in the home economics movement in the county. She taught high school English at Westfield from 1930 to 1948, and also German in the early 1930's. 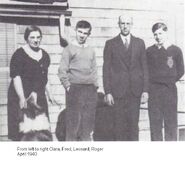 A postcard to Clara from her cousin and future husband, Leonard, dated 11/26/11

A postcard to Clara from her brother, Carl, postmarked November 6, 1913 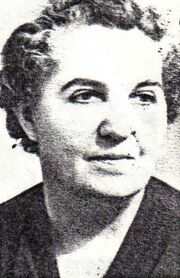