Familypedia
Register
Don't have an account?
Sign In
Advertisement
in: Orsini (surname), Born in 1453, Died in 1488,
and 11 more

Clarice Orsini (c. 1453 – 30 July 1488) was the daughter of Jacopo (Giacomo) Orsini (see Orsini family), lord of Monterotondo and Bracciano, and his wife and cousin Maddalena Orsini. Born in Rome, she is most known as the wife of Lorenzo de' Medici (Lorenzo the Magnificent), de facto ruler of the Florentine Republic. She was the mother of Pope Leo X.

Lorenzo and Clarice were married by proxy on 7 February 1469. The marriage was arranged by Lorenzo's mother Lucrezia Tornabuoni, who wanted her eldest son to marry a woman from a noble family, in order to enhance the social status of the Medicis. Clarice's dowry was 6,000 florins. She arrived in Florence on 4 June 1469.

Clarice was not popular in Florence, because her strict religious personality was in deep contrast with the humanist ideals of the age. Even Lorenzo preferred a Florentine woman, Lucrezia Donati, to whom he dedicated his poems, but he had children only from Clarice. Of the nine children born to them, three died in infancy.

During the Pazzi Conspiracy, which was aimed at murdering Lorenzo and his younger brother Giuliano, Clarice and her children were sent to Pistoia. (The Pazzis succeeded in murdering Giuliano, but Lorenzo survived the attack, thus the conspirators' plan to replace the Medicis as de facto rulers of Florence failed.)

Clarice returned to Rome several times to visit her relatives; she also visited Volterra, Colle Val d'Elsa, Passignano, and other places in the 1480s. On 30 July 1488 she died unexpectedly from tuberculosis in Florence.

Clarice and Lorenzo's children were: 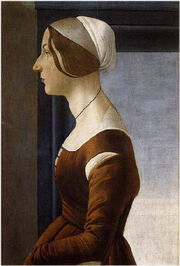