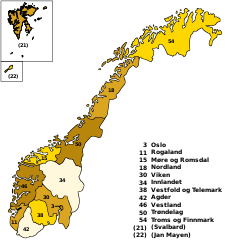 |- |Template:Politics of Norway |} Norway is divided into 19 administrative regions, called counties (Norwegian: singular fylke, plural fylker (Bokmål) / fylke (Nynorsk); until 1918 known as amt, pl. amter / amt). The counties form the primary first-level subdivisions of Norway and are further divided into 431 municipalities (kommune, pl. kommuner / kommunar). The capital Oslo is considered as both a county and a municipality.

There is some political disagreement on whether counties are a practical, economical or even necessary level of administration. See politics of Norway for more information.

Below is a list of the Norwegian counties as they have been since 1919, with their current administrative centres. The county numbers are from the official numbering system ISO 3166-2:NO, which follows the coastline from the Swedish border in the southeast to the Russian border in the northeast. The number 13 was dropped from the system when the city of Bergen (county no. 13) was merged into Hordaland (county no. 12) in 1972.

From the consolidation to a single kingdom, Norway was divided into a number of geographic regions that had its own legislative assembly or Thing, such as Gulating (Western Norway) and Frostating (Trøndelag). The second-order subdivision of these regions was into fylker, such as Egdafylke and Hordafylke. In 1914, the historical term fylke was brought into use again to replace the term amt introduced during the union with Denmark. Current day counties (fylker) often, but not necessarily correspond, to the historical areas.

Formerly the term len (plural len) in Norway signified an administrative region roughly equivalent to today's counties. The historic len was an important administrative entity during the period of Dano-Norwegian unification after their amalgamation as one state, which lasted for the period 1536[1]–1814.

At the beginning of the 1500s the political divisions were variable, but consistently included four main len and approximately 30 smaller sub-regions with varying connections to a main len. Up to 1660 the four principal len were headquartered at the major fortresses Bohus Fortress, Akershus Fortress, Bergenhus Fortress, and the fortified city of Trondheim[2]. The sub-regions corresponded to the church districts for the Lutheran church in Norway.

These four principal len were in the 1530s divided into approximately 30 smaller regions. From that point forward through the beginning of the 1600s the number of subsidiary len was reduced, while the composition of the principal len became more stable.[3]

Len, written as län, continues to be used as the administrative equivalent of county in Sweden to this day. Each len was governed by a lenman. [4]

With the royal decree of February 19, 1662, each len was designated an amt (plural amt) and the lenmann was titled amtmann, from German Amt (office), reflecting the bias of the Danish court of that period.[5]

After 1671 Norway was divided into four principal amt or stiftsamt and there were nine subordinate amt:

From 1730 Norway had the following amt:

At this time there were also two counties controlled by counts, together forming what is now Vestfold county:

From 1919 each amt was renamed a fylke (plural fylker) (county) and the amtmann was now titled fylkesmann (county governor).