Familypedia
Register
Don't have an account?
Sign In
Advertisement
in: Pages with non-numeric formatnum arguments, Covasna, Towns in Romania,
and 2 more

Covasna (Hungarian: Kovászna
German: Kowassen, Kowasna, Kovasna ') is a town in Covasna county, Transylvania, Romania, at an altitude of 550–600 m.

Known as the "town of 1,000 mineral springs," Covasna is famous for its mineral waters. Each spring has a different mixture of minerals, chiefly carbon dioxide, sulfur, and ammonia. Its name is derived from the Slavic word Cvaz, meaning sour, referring to the taste of its mineral waters.

The town administers one village, Chiuruș (Hungarian: Csomakőrös). The village has a population of 451 and has an absolute Székely Hungarian majority.

Demographic movement according to the censuses: 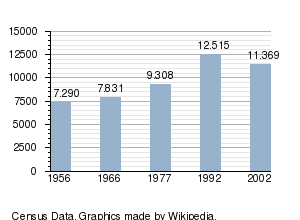 The famous Hungarian explorer and linguist Sándor Kőrösi Csoma was born in Chiuruş/Csomakőrös in 1784. Kőrösi is widely seen as the founder of Tibetology, he was the compiler and author of the first Tibetan-English dictionary and grammar book. He died in Darjeeling, India in 1842.

A statue in his honour was erected in the centre of the village in 1972 and there is an exhibition in the cultural centre.