Craig was born prematurely (possibly as early as at six months, based on his mother's estimation) and his survival was considered a miracle. Although I (Pdlloyd) was only three-years-old, I can remember my parents bringing Craig home from the hospital when they released him. My mother held him in her arms and bent down to show him to me. I'd been hoping for a baby sister; a brother was okay, too.

Craig was a sweet, happy baby, always smiling. He kept right on smiling as a toddler, but was slow to talk, so he started speech therapy when he was three. As his big sister, I sometimes helped him with his speech lessons. It's a little unclear now, but I think we used to sit and roll a ball back and forth between us as we went over the sounds and words he needed to practice.

In his early to mid twenties, Craig developed schizophrenia, which robbed him of many of the activities and life experiences that most of us take for granted. Despite his illness, he remained a good person. He took his medications, which he understood helped him, and never got into any trouble.

Craig loved watching sports on television and often fantasized about becoming a sports star. While football and the Kansas City Chiefs were his primary focus, he enjoyed basketball and bowling, as well. He joined a bowling team and did quite well for a number of years.

Craig never married and continued to live at home until his death from cardiomyopathy. 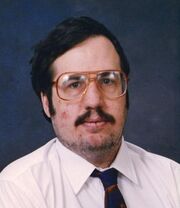