Familypedia
Register
Don't have an account?
Sign In
Advertisement
in: Dmitrov, Established in 1154, Settlements in Moscow Oblast

Dmitrov was founded by Yuri Dolgoruky in 1154 deep in the woods at the site where his son Vsevolod was born. Its name is explained by the fact that Vsevolod's patron saint was Saint Demetrius.

In 1181 Dmitrov is mentioned in chronicles as one of the fortified settlements on the outskirts of Vladimir and Suzdal. Dmitrov was not only of strategic importance as a Border fortress, but was also an economic center. From Dmitrov, the Yakhroma and Sestra rivers ensured an acces to the upper reaches of the Volga basin, on land the city was connected to the upper reaches of the Klyazma River, from where goods could be delivered to Vladimir. However, a reliable trade route towards the Yakhroma and Sestra Rivers could be established only in the 14th and 16th centuries.

In 1180, during the war Sviatoslav III of Kiev and Vsevolod III Yurievich of Vladimir, the city of Dmitrov was burned down. However the city soon recovered from the devastation and in 1214 it had already become a big city with various suburbs. The city was again under siege in the following years, being attacked by an army recruited in Moscow by Vsevolod's son, Vladimir Vsevolodovich. The city was however able to resist and was not conquered.

Dimitrov, capital of an independent principalily[]

The city has repeatedly changed its rulers. During the attack, Vladimir was a member of Perejaslavskogo principality. Around 1247 formed the principality of Galicia-Dmitrov , then, between 1280 , when the Chronicle reported the death of Prince of Galich and Dmitrov David Roerich and 1334 , when he mentioned Dmitrov princes Boris Galitsky and Fedor, Galicia-Dmitrov Duchy of splits and formed an independent principality of Dmitrov

In the 13th century, the town marked a point where converged the borders of the Principalities of Principality of Moscow, Tver, and Peresavl. The town itself was part of the principality of Galich-Mersky, located much to the north, until 1364, when it was incorporated into the Grand Principality of Muscow. Both Dmitri Donskoy and his grandson Vasily II granted Dmitrov as an appanage to their younger sons, so the town was a capital of a tiny principality. In 1374, it achieved town status.

The rule of Ivan III's son Yuri Ivanovich inaugurated the golden age of Dmitrov. It is during his reign that the black-domed Assumption Cathedral in the kremlin and a smaller monastery cathedral of Sts. Boris and Gleb were built. Thereafter, the town passed to Yuri's brother, Andrei of Starista. In 1569, it was seized from Vladimir of Staritsa, added to the Oprichnina and consequently declined. The town suffered further damage during the Time of Troubles, when it was ransacked by the Poles.

In 1812, Dmitrov was briefly occupied by the Grande Armée but in 1941 the Wehrmacht soldiers were stopped on the outskirts of the town. The Anarchist prince Peter Kropotkin spent his last years there. In the 1930s, the local kremlin was excavated by Soviet archaeologists. Apart from the Assumption Cathedral, chief landmarks of the Dmitrov District are the cloisters of Sts. Boris and Gleb, of St. Nicholas on the Peshnosha River, and of the Virgin's Nativity at Medvezhya Pustyn', all three dating back to the 16th century.

Dmitrov is a railroad junction of the Moscow (Savyolovsky terminal)–Savyolovo branch and the Dmitrov – Alexandrov branch. The railroad provides an efficient service to Moscow. Dmitrov is also a cargo port on the Moscow Canal.

Dmitrov is twinned with:

Cathedral of the Assumption

Statue of Cyril and Methodius near the Cathedral of the Assumption.

Eternal flame in the central square of Dmitrov, 2009

Statue of Boris and Gleb

Fountain in the central square of Dmitrov 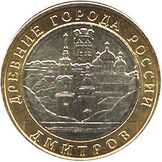