Familypedia
Register
Don't have an account?
Sign In
Advertisement
in: Trump (surname), Born in 1946, People on Wikipedia,
and 49 more

45th President of the United States

Edit Facts
Donald John Trump is the 45th and current President of the United States, in office since January 20, 2017. Before entering politics, he was a businessman and television personality.

See the tree tab above.

It appears that he and Democratic rival Hillary Diane Rodham (1947) are 19th cousins, having common ancestry in John of Gaunt, 1st Duke of Lancaster (1340-1399) and his mistress, later his wife, who used her first married name, Katherine Swynford, before marrying John. 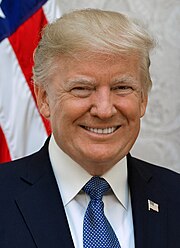