Familypedia
Register
Don't have an account?
Sign In
Advertisement
in: Eisenhower (surname), Born in 1890, Died in 1969,
and 85 more

Edit Facts
Dwight D. Eisenhower", was a five-star General in the United States Army and U.S. politician, who served as the thirty-fourth President of the United States (1953–1961). During World War II, he served as Supreme Commander of the Allied Expeditionary Force of the Allies of World War II in Europe, with responsibility for planning and supervising the successful Battle of Normandy and Drive to the Siegfried Line in 1944-45. In 1951, he became the first supreme commander of NATO. As a History of the United States Republican Party, he was elected the 34th U.S. President, serving for two terms. As president, he oversaw the cease-fire of the Korean War, kept up the pressure on the Soviet Union during the Cold War, made Nuclear weapons and the United States a higher defense priority, launched the Space Race, enlarged the Social Security (United States) program, and began the Interstate Highway System. 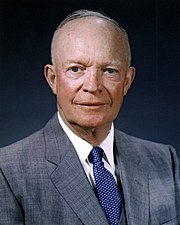