Familypedia
Register
Don't have an account?
Sign In
Advertisement
in: Lists of Scottish people, House of Douglas and Angus, Forfeited earldoms in the Peerage of Scotland

The Earls of Douglas, chiefs of Clan Douglas, and their successors claimed descent from Sholto Douglas, a mythical figure dated by Godscroft to 767 AD.[1] However, it is more likely that they were descendants of Flemish immigrants to Scotland, during the reign of David I.[2] Through the marriage of William the Hardy, grandfather of the 1st Earl, to Eleanor de Lovaine, the Earls of Douglas could trace their ancestry to the Landgraves of Brabant. In the story of Sholto Douglas, his son William Douglas is a commander of forces sent by the mythical Scottish king Achaius (Eochaid?), to the court of Charlemagne to aid him in his wars against Desiderius, King of the Lombards. William Douglas is said to have settled in Piacenza where his descendants became powerful local magnates under the name Scotti/Scoto, and eventual leaders of the Guelf faction of that city.[3]

The first Douglas on record in Scotland is William I, Lord of Douglas (c. 1174-1214), where he was witness to a charter of bishop Jocelin of Glasgow in 1198, where he signed "Will. de Dufglas" in what can only be a territorial designation.[4] It can be deduced however, that there was a connection to the House of Moray and its progenitor, Freskin, Lord of Duffus, insofar as the later blazon of both Houses both contained three stars argent on a field azure; further in a document pertaining to Bricius de Douglas, William of Douglas's son and Bishop of Moray, he refers to his avunculus Freskin of Kerdal, an unusual name for the time in Scotland.[5] This connection with the Morays can be later attested in a rhyme penned by Andrew of Wyntoun around the time of the marriage of Archibald the Grim to Johanna de Moravia the Moray heiress, of which further below:

Sir William the Hardy is the first of the Douglas Lords on record to take a major part in domestic and international affairs. He partook in Wallace's uprising against English rule in Scotland and died captive in the Tower of London.[7] His son Sir James Douglas, his estates forfeit to the English crown, swore allegiance to Robert the Bruce in 1306 prior to the latter's coronation, and was to share the deprivations and small victories of Bruce during the years leading up to Bannockburn. Afterwards he was appointed Warden of the Western March on the Scottish Border. Following Bruce's death, Sir James Douglas, now known as either "the Black Douglas" to the English, or the "Good Sir James" to the Scots, took the King's heart on crusade, and died fighting the Moors in Spain.[8]

The Good Sir James's nephew William, Lord of Douglas was created 1st Earl of Douglas in 1358, and greatly increased Douglas territory by marrying Margaret, Countess of Mar. The creation of the Earldom can be accurately dated to 26 January that year, because of a charter witnessed by Douglas on the 25 January where he is described as "William, Lord of Douglas, Knight", and another of the 27th of the month as the Earl of Douglas.[9][10] The power of Douglas was further increased by the marriage of the 2nd Earl to Princess Isabel, daughter to Robert III of Scotland. The acme of Douglas territorial power came when Archibald the Grim, Lord of Galloway a bastard son of the Good Sir James inherited the Earldom following the 2nd Earl's death at the Battle of Otterburn. "Black Archibald" as he was also known, was by right of conquest Lord of Galloway; and by right of his wife, the Moray heiress Joanna de Moravia, the Lord of Bothwell and its vast entail. Already one of the largest landowners in the realm, Archibald the Grim was now the greatest Tenant-in-chief of the Scottish Crown.

William, the 1st Earl, Archibald the Grim and both his son the 4th Earl and grandson, the 5th Earl fought in France as well as the along the Anglo-Scottish Border, during what would become known as the Hundred Years War. The 1st Earl and the 3rd were both present at the Battle of Poitiers, and the future 5th Earl Archibald, Earl of Wigtown was a deputy of John Stewart, Earl of Buchan at the Battle of Baugé and elsewhere. Archibald Douglas, 4th Earl of Douglas, had fought at Homildon Hill, was captured there and then joined the rebel Northern English Barons to fight at Battle of Shrewsbury where he was again captured. It was during this episode of his life that Douglas makes an appearance as one of the characters in William Shakespeare's Henry IV, Part 1. In 1423 Douglas's son Wigtown, returned to Scotland to raise more troops for the French war and managed to enlist his father's support, the 4th Earl sailed for France with an army some 6,500 strong, was created Duke of Touraine and Lieutenant General of France by a grateful Dauphin. Douglas was killed at Battle of Verneuil in 1424. The 5th Earl of Douglas upon his accession was sometime regent of Scotland during the minority of James II of Scotland and Lieutenant-General of Scotland.

The 5th Earl's sons, the sixteen-year-old William Douglas, 6th Earl of Douglas and his brother David Douglas, were to be victim to the cabal of Sir William Crichton, Sir Alexander Livingston of Callendar, and their great uncle James Douglas, Earl of Avondale who wished to break the power of the Black Douglases. The boys were summoned to Edinburgh Castle, and where at what is known as the 'Black Dinner' the Earl and his brother were taken into the Castleyard and executed before the young king.[11]

Downfall of the Black Douglases[]

The Earl of Avondale, the boys' great uncle and supposed conspirator into their deaths, became the 7th Earl of Douglas; known as "James the Gross" he inherited all the Douglas patrimony and died in 1443. Far from breaking Douglas power, the death of the 6th Earl consolidated it into the hands of the five formidable sons of James the Gross. James II of Scotland, exasperated at his overmighty vassal, William Douglas, 8th Earl of Douglas, and his refusal to break a league entered into with the Earl of Crawford and John of Islay, stabbed him to death with his own hands, even though Douglas had been issued a safe conduct. Douglas's brothers, James Douglas, 9th Earl of Douglas, Archibald Douglas, Earl of Moray, Hugh Douglas, Earl of Ormonde, and John Douglas, Lord of Balvenie went into open rebellion against the Crown, but were finally put down in a skirmish in 1455 known as the Battle of Arkinholm, ironically the royal forces were led by another Douglas, the 'Red' George Douglas, 4th Earl of Angus. The Douglas brothers were all slain, either in battle or executed afterwards, except the 9th Earl who was in England at the time. The 9th Earl was forfeited, but continued to foment unrest in Scotland from England, until his capture at the Battle of Lochmaben Fair in 1484. The aged Douglas was forced to spend the rest of his days at Lindores Abbey, his estates being divided up between the King's supporters, most notably Angus.

Following the death of the 2nd Earl at the Battle of Otterburn in 1388 without legitimate issue, the Earldom passed to a bastard son of 'The Good Sir James', the poetically named Archibald the Grim, the Lord of Galloway. This occurred through articles of special entail in the resignation of title by Hugh the Dull, Lord of Douglas. George Douglas, 1st Earl of Angus the bastard son of the 1st Earl by his sister-in law Margaret Stewart, Dowager Countess of Mar & Countess of Angus, inherited his mother's Earldom of Angus. Retrospectively the two branches of Douglas and Angus were described as the Black and Red lines respectively.

The Black Douglases fell from power and were attainted by King James II in 1455. The seventh Earl was created Earl of Avondale and Lord Balveny in 1437, also in the Peerage of Scotland. These titles also became forfeit in 1455.

The title of Douglas was restored in 1633 for the 'Red' Douglas line, when William Douglas, 11th Earl of Angus (1589–1660), was created First Marquess of Douglas by Charles I.

Lordship of Douglas, and other estates and title devolved upon: George Douglas, 4th Earl of Angus

The following titles were held by the Earl of Douglas, at various times.

Seals of the Douglas Lords[] 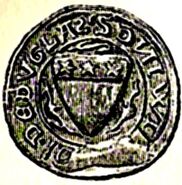 Seal of Archibald the Grim, 3rd Earl of Douglas

Seal of the 4th Earl of Douglas, Duke of Touraine

This line is represented now by the Dukes of Hamilton, the heirs male of the House of Douglas.