Edirne (Turkish pronunciation: [eˈdiɾne]), is a city in the Turkish region of East Thrace, close to its borders with Greece and Bulgaria. Edirne served as the third capital city of the Ottoman Empire from 1363 to 1453,[3] before Constantinople (present-day Istanbul) became the empire's fourth and final capital. At present, Edirne is the capital of Edirne Province in Turkish Thrace. The city's estimated population in 2010 was 138,793, up from 119,298 in 2000.

The city was founded as Hadrianopolis (Aδριανούπολις in Greek), named for the Roman Emperor Hadrian. This name is still used in the Modern Greek (Αδριανούπολη). The English name Adrianople, by which the city was known until the Turkish Postal Service Law of 1930, has fallen into disuse. The Turkish: Edirne, Bulgarian: Одрин (Odrin, [’odrin]), Albanian: Edrêne, Macedonian: Eдрене (Edrene) and Serbian: Једрене / Jedrene are adapted forms of the name Hadrianopolis or of its Turkish version; see also its other names.

The area around Edirne has been the site of no fewer than 16 major battles or sieges, from the days of the ancient Greeks. Military historian John Keegan identifies it as "the most contested spot on the globe" and attributes this to its geographical location.

According to Greek mythology, Orestes, son of king Agamemnon, built this city as Orestias, at the confluence of the Tonsus (Toundja) and the Ardiscus (Arda) with the Hebrus (Maritza). The city was (re)founded eponymously by the Roman Emperor Hadrian on the site of a previous Thracian settlement known as Uskadama, Uskudama or Uskodama or Uscudama. It was the capital of the Bessi,[5] or of the Odrysians. Hadrian developed it, adorned it with monuments, changed its name to Hadrianopolis after himself (which would be corrupted into Adrianopolis and shortened to Adrianople), and made it the capital of the Roman province of Thrace. Licinius was defeated there by Constantine I in 323, and Emperor Valens was killed by the Goths in 378 during the Battle of Adrianople (378).

In 813, the city was seized by Khan Krum of Bulgaria who moved its inhabitants to the Bulgarian lands towards the north of the Danube.

During the existence of the Latin Empire of Constantinople, the Crusaders were decisively defeated by the Bulgarian Emperor Kaloyan in the Battle of Adrianople (1205). Later Theodore Komnenos, Despot of Epirus, took possession of it in 1227, but three years later was defeated at Klokotnitsa by Asen, Emperor of the Bulgarians.

The city remained the Ottoman capital for 90 years until 1453, when Mehmed II moved the capital to Constantinople (present-day Istanbul). Edirne is famed for its many mosques, domes, minarets, and palaces from the Ottoman period.

Under Ottoman rule, Edirne was the principal city of the administrative unit, the eponymous Eyalet of Edirne, and after land reforms in 1867, the Vilayet of Edirne. Sultan Mehmed II, the conqueror of Constantinople, was born in Edirne. It was here that he fell under the influence of some Hurufis dismissed by Taş Köprü Zade in the Şakaiki Numaniye as "Certain accursed ones of no significance", who were burnt as heretics by a certain Mahmud Pasha.[7]

Sultan Mehmed IV left the palace in Constantinople and died in Edirne in 1693.

During his exile in the Ottoman Empire, the Swedish king Charles XII stayed in the city during most of 1713.[8]

Bahá'u'lláh, the founder of the Bahá'í Faith, lived in Edirne from 1863 to 1868. He was exiled there by the Ottoman Empire before being banished further to the Ottoman penal colony in Akka. He referred to Edirne in his writings as the "Land of Mystery".[9]

Edirne was a sanjak centre during the Ottoman period and was bound to, successively, the Rumeli Eyalet and Silistre Eyalet before becoming a provincial capital of the Eyalet of Edirne at the beginning of the 19th century; until 1878, the Eyalet of Edirne comprised the sanjaks of Edirne, Tekfurdağı, Gelibolu, Filibe, and İslimye.

Edirne was a vital fortress defending Ottoman Constantinople and Eastern Thrace during the Balkan Wars of 1912–13. It was briefly occupied by the Bulgarians in 1913, following the Siege of Adrianople. The Great Powers–Britain, Italy, France, and Russia–forced the Ottoman Empire to cede Edirne to Bulgaria at the end of First Balkan War, which created a political scandal in the Ottoman government in Istanbul (as Edirne was a former capital of the Empire), leading to the 1913 Ottoman coup d'état. Although it was victorious in the coup, the Committee of Union and Progress was unable to keep Edirne, but under Enver Pasha (who proclaimed himself the "second conqueror of Edirne", after Murad I), it soon retook it from the Bulgarians quickly after the Second Balkan War began.

It was occupied by the Greeks between the Treaty of Sèvres in 1920 and their defeat at the end of the Greco-Turkish War, also known as the Western Front of the larger Turkish War of Independence, in 1922.

According to the 2007 census, Edirne Province had a population of 382,222 inhabitants. The city is a thriving center of commerce for woven textiles, silks, carpets and agricultural products.

Panoramic view of the city from Selimiye Mosque.

Adrianople was made the seat of a Greek metropolitan and of a Gregorian Armenian bishop, Adrianople is also the centre of a Bulgarian diocese, but not recognized and deprived of a bishop. The city also had some Protestants. The Latin Catholics, foreigners for the most part, and not numerous, were dependent of the vicariate-apostolic of Constantinople. At Adrianople itself were the parish of St. Anthony of Padua (Minors Conventual) and a school for girls conducted by the Sisters of Charity of Agram. In the suburb of Karaağaç were a church (Minor Conventuals), a school for boys (Assumptionists) and a school for girls (Oblates of the Assumption). Each of its mission stations, at Tekirdağ and Alexandroupoli, had a school (Minor Conventuals), and there was one at Gallipoli (the Assumptionists).

Around 1850, from the standpoint of the Oriental Catholics, Adrianople was the residence of a Bulgarian vicar-apostolic for the 4,600 Uniats of the Ottoman vilayet (province) of Thrace and after 1878 - of the principality of Bulgaria. They had 18 parishes or missions, 6 of which were in the principality, with 20 churches or chapels, 31 priests, of whom 6 were Assumptionists and 6 were Resurrectionists; 11 schools with 670 pupils. In Adrianople itself were only a very few United Bulgarians, with an Episcopal church of St. Elias, and the churches of St. Demetrius and Sts. Cyril and Methodius. The last is served by the Resurrectionists, who have also a college of 90 pupils. In the suburb of Karaağaç, the Assumptionists have a parish and a seminary with 50 pupils. Besides the Uniate Bulgarians, the above statistics included the Greek Catholic missions of Malgara (now Malkara) and Daoudili (now Davuteli village in Malkara), with 4 priests and 200 faithful, because from the civil point of view belonged to the Bulgarian Vicariate.

Later however, the Roman Catholic diocese was discontinued, and exists only in name as a titular metropolitan archbishopric, under the full name Hadrianopolis in Haemimonto to distinguish it from several other titular sees named Hadrianopolis.

Culture, sites and partnership with Europe[]

Situated near the Greek (7 km) and Bulgarian (20 km) borders, Edirne is famed for its many mosques, domes and minarets. It contains the ruins of the ancient palace of the Ottoman Sultans and the Selimiye Mosque, one of the most important monuments in the province; built in 1575 and designed by Turkey's greatest master architect, Mimar Sinan, it has the highest minarets in Turkey, at 70.9 meters and a cupola three or four feet higher than that of Hagia Sophia Byzantine Orthodox Cathedral ( museum) in Istanbul. Carrying the name of the then reigning the Ottoman Sultan Selim II, this mosque represents Turkish marble handicrafts and it is covered with valuable tiles and fine paintings.

Another notable building is the Trakya University's Bayezid II Külliye Health Museum, an important monument with its complex construction comprising many facilities used in those times.

Besides the mosques, there are different sites to be visited in Edirne, all reflecting its rich past. The most prominent place being the Edirne Palace, which was the "Palace of the Empire" built during the reign of Murad II. There are caravansaries, like the Rustem Pasha and Ekmekcioglu Ahmet Pasha caravansaries, which were designed to host travelers, in the 16th century.

A cultural partnership with Lörrach in Germany has been started in 2006. The goal is to exchange pupils and students to improve their cultural skills and understanding.

Edirne is home to the traditional oil-wrestling tournament called Kırkpınar. Held every year in June, it is said to be the oldest active sport organization after the Olympic Games that were refounded only after centuries of inactivity.

Another international festival in Edirne is Kakava, a celebration of Romani people held on May 5 each year.

Edirne's economy largely depends on agriculture. 73% of the working population work in agriculture, fishing, forests, hunting. There are lots of things that are cultivated here. Its lowlands are productive. The field crop cultivation has developed so much here. Corn, sugarbeet and sunflower are the first. Melon, watermelon and viniculture are advanced. For the last decade, the agricultural products have doubled. Corn, rice, sunflower, sugarbeet, tomato, eggplant, melon, watermelon, grape are cultivated so much.

The through highway with an important role in global transport that connects Europe to Middle East and Anatolian to Istanbul passes through Edirne.

Also, the existence of many historical and natural touristic places and events lead the fact that tourism has become a leading component of the economic growth of the city in recent years.

Industry has also been developing. Agriculture-based industries (agro-industries) are especially important for the city's economy.

Interior of the mosque 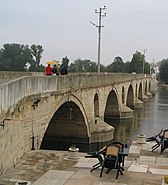 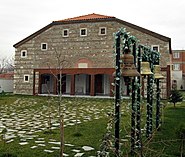