Familypedia
Register
Don't have an account?
Sign In
Advertisement
in: Plantagenet (surname), Born in 1244, Died in 1296,
and 12 more

He spent his early years traveling back and forth to France with his mother gathering mercenaries and money for his father's battles with the barons. In 1253 he was invested by Pope Innocent IV in the Kingdom of Sicily and Apulia. At about this time he was also made Earl of Chester. These were of little value as Conrad IV of Germany, the real King of Sicily, was still living and the Earldom of Chester was transferred to his elder brother Edward. In addition to that, he was in little position to rule as he was just a small boy at the time.

In 1253 he was invested by Pope Innocent IV in the Kingdom of Sicily and Apulia. At about this time he was also made Earl of Chester. These were of little value as Conrad IV of Germany, the real King of Sicily, was still living and the Earldom of Chester was transferred to his elder brother Edward. In addition to that, he was in little position to rule as he was just a small boy at the time.

Edmund did receive important possessions and dignities, by the age of 20. Simon de Montfort, 6th Earl of Leicester forfeited his title in 1265, due to his involvement with the baronial rebellions against Edmund's father, Edward III. Edmund received the Earldom of Leicester and also the honour of the Stewardship of England (a part of that earldom) and the lands of Nicolas de Segrave, who was also involved in the baronial war. In 1266 the Earl of Derby, Robert de Ferrers rebelled and forfeited his lands, which were granted to Edmund, including the honour of Lancaster. This was created as the entirely new Earldom of Lancaster and after this he was commonly known as the Earl of Lancaster. This was also the beginning of the first house of Lancaster. In 1267 he was granted the lordship of Builth Wells in opposition to the then holder, Llywelyn ap Gruffydd, who was also oppositional to his father Edward III. To help him conquer the land he was also granted his elder brother's lordships of the Trilateral of Skenfrith, Grosmont and White Castle together with Monmouth. In 1271 he accompanied his elder brother Edward on the Ninth Crusade to Palestine. Some historians, including the authors of the Encyclopedia Britannica article on him, state that it was because of this that he received the nickname Crouchback (which they say means "cross back") indicating that he was entitled to wear a cross on his back. Some say it was because he developed the habit of wearing the cross all the time afterwards.

When his brother Edward returned from crusade, he became king, in 1272. He served his brother faithfully, by serving in wars in Scotland and Wales. Gascony was one of the only French territories that was retained by the English crown after the disastrous military careers of Edmund's father and grandfather. Edmund helped his brother by negotiating with the French king Philip the Fair, for these lands, which Philip ultimately declared forfeit. Edward made him lieutenant of Gascony in 1296 and he traveled to France with the Earl of Lincoln and laid siege to Bordeaux, but Edmund died later that year. Reportedly, he died of disappointment after failing to capture Bordeaux. His body was taken to Westminster Abbey, to be interred. On his return from the Crusade he made Grosmont Castle his favoured home and was responsible for much rebuilding there. He demolished the D-shaped towers and built accomodation over it, raising the height and extending the south-west tower to make it into a five-storeyed great tower or keep. The living quarters could only be approached by awooden stairway to the north. To the east he built a giant false doorway which only allowed access to the ground and first floors. Most of this work was done between 1274 and 1294. He was responsible for the great chimney, which made the castle famous. Edmund also renovated the church in Grosmont in his mother's honor. His son Henry Plantagenet, 3rd Earl of Lancaster was born there in 1281. 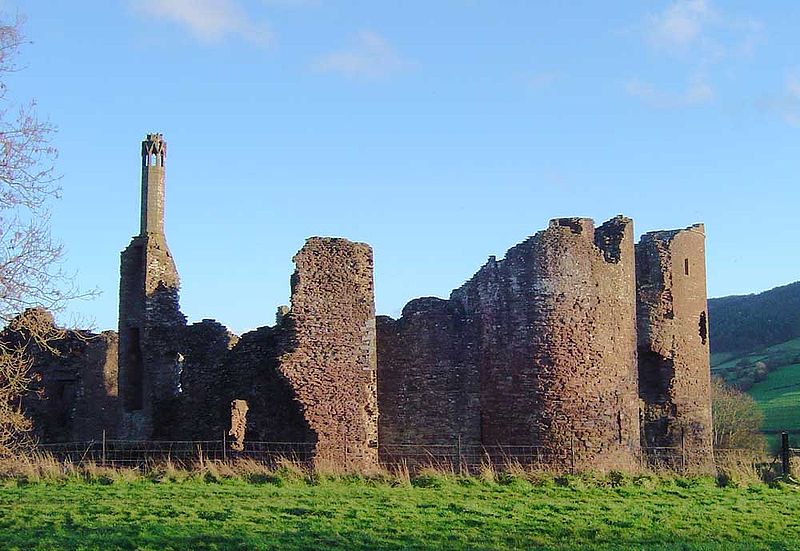 Edmund was married first on 8 April 1269, to Lady Aveline de Forz, the daughter and only heir of William de Forz, Count of Aumale and Earl of Albemarle and Isabel de Reviers, Countess of Aumale. She died after four years of marriage, at the age of according to various sources age, 15, 18, or 22, and was buried at Westminster Abbey. The couple had no children, though some sources believe she may have died in childbirth or shortly after a miscarriage. Her monument in Westminster Abbey was for many years hidden. It is considered to be quite beautiful and a precious piece of antiquity. Her sarcophagus is an alter tomb of touchstone, under a magnificent mausoleum; it is made in imitation of the hearses under which the illustrious were laid until their funeral. There is a cumbent freestone on the tomb effigy of Aveline, five feet seven inches in length. She appears to be a lovely woman in the bloom of youth. Her dress is a loose robe and a mantle of flowing drapery. On her head is a coif, joined below the temples to a barbe or chincloth, in the manner worn by mourners, passing over the lower part of her chin. There is a long Paris hood on the coif, which falls is easy folds to her shoulders. Her hands are joined and raised in prayer. Her head rests on a pillow, which is supported by two angels with expanded wings. Her feet are against two dogs, representing fidelity. The canopy is extremely rich, having one side a vine branch full of fruit, not representing her fertility, but because it was a family emblem of the family of her mother, the Redvers, earls of Devonshire. There is an Acanthus on the other side. She was a very rich heiress, which was responsible for her marriage. She had not only inherited the lands of her father William, Earl of Albemarle, but also the lands of her mother in Devonshire.

He married his second wife in Paris, on 3 February 1276. She was Blanche of Artois, daughter of Robert I of Artois and Matilda of Brabant. She had previously married to Henry of Navarre and had ruled after his death in 1274, as Queen Regent of Navarre in right of their daughter, Joan of Navarre. That same year he became the Count of Champagne and Brie in France, after these lands were taken under the protection of the king of France. They were part of Blanche's regency. When Jeanne married Philip the Bold in 1284, Champagne became a permanent possession of the French crown.

Edmund died 5 JUN 1296 in Bayonne, and was buried in Westminster Abbey. On the base of his tomb on the north side are the remains of a painting depicting ten knights in mail armour and surcoats, although only a few can now be made out. The painting is also thought to be by Walter of Durham. His effigy also has his head resting on a pillow supported by angels, like the one of his first wife, Aveline. There are also sculptures of weepers next to him. It has a three gabled canopy. First described and drawn by John Carter in the late 18th century the paintings were damaged by an oil bomb thrown by a fanatic in 1968. 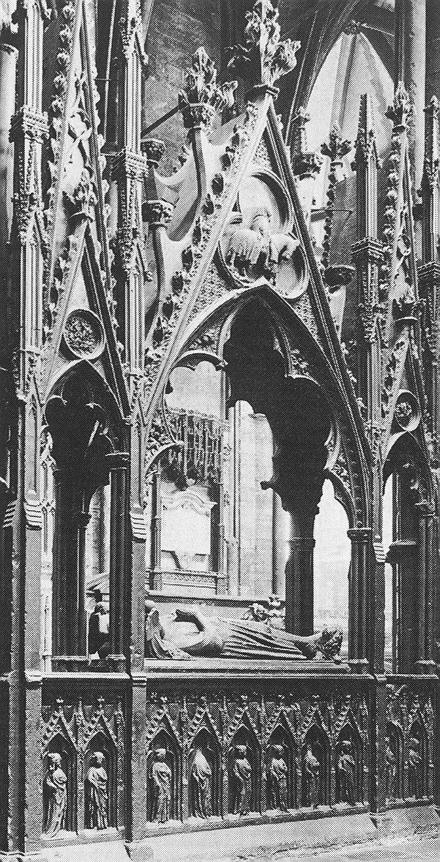 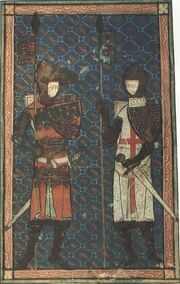