Familypedia
Register
Don't have an account?
Sign In
Advertisement
in: Everett (surname), Born in 1794, Died in 1865,
and 30 more

Edward Everett was born on April 11, 1794 in Dorchester, Massachusetts (then independent from Boston), the fourth of eight children, to the Rev. Oliver Everett and Lucy Hill Everett, the daughter of Alexander Sears Hill. His father was a direct descendant of early colonist Richard Everett, and his mother's family also had deep colonial roots.[1] His father had served as pastor of New South Church, retiring due to poor health two years before Everett was born. He died in 1802, when Edward was eight, after which his mother moved the family to Boston. He attended local schools, and then a private school of Ezekiel Webster. During this time Ezekiel's brother Daniel sometimes taught classes; Everett and Daniel Webster would later form a close friendship.[2]

He was elected to the United States House of Representatives and served from 4 March, 1825-3 March, 1835. He declined to be a candidate for renomination in 1834. He was governor of Massachusetts from 1836–1839.

Everett served as United States Envoy Extraordinary and Minister Plenipotentiary to Britain from 1841-1845, declining a commission to China in 1843. He was president of Harvard University from 1846–49

In 1852 he was appointed United States Secretary of State by President Millard Fillmore to fill the vacancy caused by the death of Daniel Webster, and served to 3 March, 1853. He was elected to the United States Senate and served from 4 March, 1853, until his resignation, effective 1 June, 1854. It is said that he was embarrassed by his old-line Whig attitude of compromise on slavery.

Everett was an unsuccessful candidate for Vice President of the United States in 1860 on the Constitutional Union ticket. During the American Civil War, he traveled extensively throughout the North speaking for the Union cause and drawing immense audiences.

Widely considered the nation's greatest orator of his time, He was invited to give the main speech at the dedication of the Soldiers' National Cemetery at Gettysburg on 19 November, 1863.

The stirring address has been eclipsed in history by President Lincoln's two-minute Gettysburg Address.

Its main focus was nothing short of an outline of the history of warfare, and it began:

"Standing beneath this serene sky, overlooking these broad fields now reposing from the labors of the waning year, the mighty Alleghanies dimly towering before us, the graves of our brethren beneath our feet, it is with hesitation that I raise my poor voice to break the eloquent silence of God and Nature. But the duty to which you have called me must be performed; — grant me, I pray you, your indulgence and your sympathy."

The town of Everett, Massachusetts, which was incorporated in 1870, was named after him.

On January 9, 1865, Everett spoke at a public meeting in Boston to raise funds for the southern poor in Savannah.[1] At that meeting he caught cold, which he exacerbated four days later by testifying for three hours in a civil dispute concerning property he owned in Winchester, Massachusetts.[2] He died in Boston on January 15, and was interred at Mount Auburn Cemetery in Cambridge.[3]

On May 8, 1822 Everett married Charlotte Gray Brooks (November 4, 1800 - July 2, 1859), the daughter of Peter Chardon Brooks and Ann Gorham, who like Everett were of old New England lineage.[4] Brooks had made a fortune in a variety of business endeavors, including marine insurance, and would financially support Everett when he embarked on his career in politics. Everett would also become associated through the Brooks family with John Quincy Adams' son Charles Francis, who married one of Charlotte's sisters.[5]

The Everetts had a happy and fruitful marriage,[6] producing six children who survived infancy:[7] 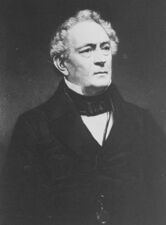