Familypedia
Register
Don't have an account?
Sign In
Advertisement
in: Plantagenet (surname), Born in 1312, Died in 1377,
and 19 more

Edward III Plantagenet became King of England, etc., upon his father's abdication in January 1327. In 1337 he also claimed the title of King of France, although he was never able to make good on the claim. He reigned until his death.

Edward III is noted for his military success and for restoring royal authority after the disastrous reign of his father, Edward II of England (1284-1327). Edward III transformed the Kingdom of England into one of the most formidable military powers in Europe; his reign also saw vital developments in legislation and government—in particular the evolution of the English parliament—as well as the ravages of the Black Death. He is one of only five British monarchs to have ruled England or its successor kingdoms for more than fifty years.

Edward was crowned at age fourteen after his father was deposed by his mother and her consort Roger Mortimer. At age seventeen he led a successful coup against Mortimer, the de facto ruler of the country, and began his personal reign. After a successful campaign in Scotland he declared himself rightful heir to the French throne in 1337, starting what would become known as the Hundred Years' War.

He ordered his uncle to be beheaded; he usurped his father's throne; he started a war which lasted for more than a hundred years, and taxed his people more than any other previous king. Yet for centuries Edward III was celebrated as the most brilliant king England had ever had, and three hundred years after his death it was said that his kingship was perhaps the greatest that the world had ever known. 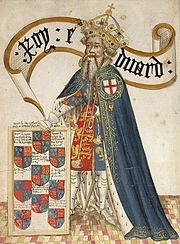